There is nothing we despise more than political propaganda media masquerading as non-partisan purveyors of the truth. We’re not surprised at all. We “stupid as sh*t Americans” have known for a generation that the MSM is motivated by only one thing only and it isn’t the truth. I’m glad to see someone has finally exposed CNN for all the world to see. 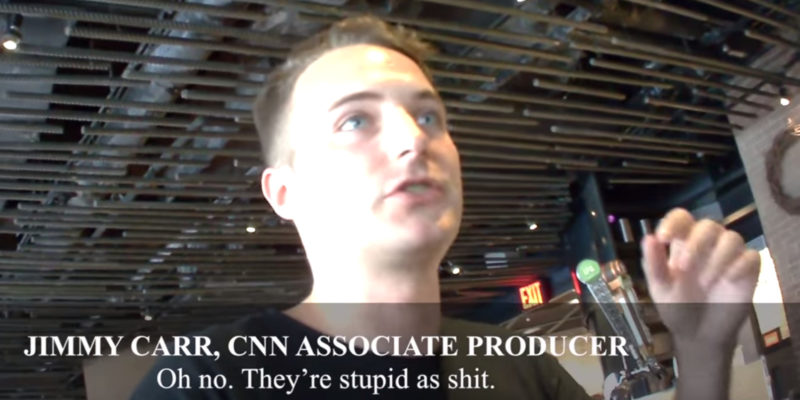 Project Veritas dropped a 3rd bombshell undercover video of CNN early Friday morning as part of a series dubbed ‘American Pravda’. In this video, CNN Associate Producer, Jimmy Carr trashes American voters by calling them ‘stupid as sh*t’. He also trashed Kellyanne Conway saying that “she looks like she got hit with a shovel”.

Bonifield went on to say that the CEO of CNN, Jeff Zucker demanded that his news channel get back to the Russia story that is a ratings winner for CNN.

Bonifield laughed off the notion that the media has an ethical responsibility and said ‘it’s a business’ and ‘they gotta do what they gotta do to make money’.

The second video was released by Project Veritas on Wednesday. It shows one of CNN’s most prominent left-leaning political commentators, Van Jones admitting that the Russia story is a ‘Nothing Burger’.

O’Keefe teased his Twitter followers on Thursday about the 3rd video:

We’re very excited about the footage we will release tomorrow in the AM. It takes this to a new level. #Checkmate #AmericanPravda

Your world is going to get rocked early tomorrow. We are so excited… https://t.co/siWEO6PvaR

O’Keefe tweeted out a video of Van Jones accusing Project Veritas of releasing edited footage, with the caption, “Van Jones will be eating these very words on the morning. Stay tuned…”

PREDICTION: @VanJones68 will be eating these very words in the morning. Stay tuned…#AmericanPravda #FakeNews #SelectiveEditing pic.twitter.com/qGVDvloDCA

CNN Associate Producer calls voters ‘stupid as sh*t’ when asked about the intellect of the American voter.

Jimmy Carr continued to bash the Trump White House and said that Kellyanne Conway is an ‘awful woman’ who “looks like she got hit with a shovel”.

Jimmy Carr also brought up the fact that their ratings are soaring because they reporting on Russia, ISIS etc.

NEW VIDEO SHOWS #CNN Producer for @ChrisCuomo & @AlisynCamerota says @KellyannePolls “looks like she got hit with a shovel.” #AmericanPravda pic.twitter.com/Wmx05X63nW