Now CNN has to go after another person that made and posted this video and it’s going to interfere with their time covering the Russian BS.

So this means that even when CNN tries to be investigative journalists, they really suck at it. Bwaahaahaa! 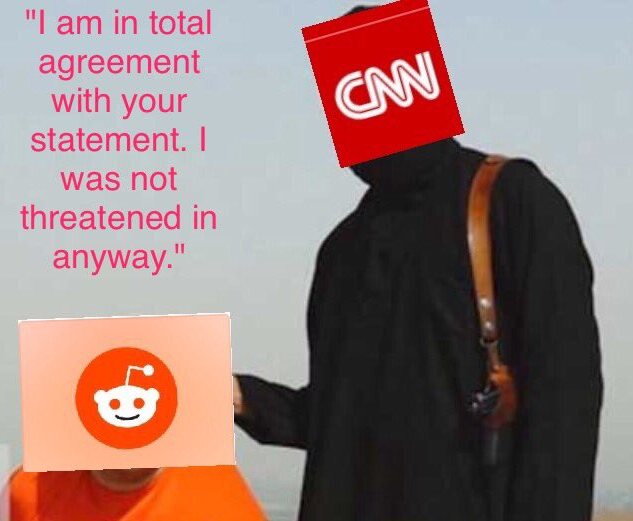 CNN reported Tuesday that they declined to publicly identify the Reddit user who created the Trump CNN wrestling video because he promised not to do it again.

CNN reporter Andrew Kaczynski then went on to say, “CNN reserves the right to publish his identity should any of that change.”

That is extortion. They threatened to dox him.

It turns out that CNN has targeted the wrong person! Analysis of the video shows evidence that the wrestling video President Trump posted to his Twitter account did not originate from this particular Reddit user.

According to BuzzFeed, “one user pointed out that what Trump tweeted wasn’t actually HanA**holeSolo’s GIF.” Trump’s gif included both video and audio – whereas the Rebel smuggler wannabe’s gif did not include audio. Furthermore, the original HanA**holeSolo gif “was shorter, had a different aspect ratio, and had a WWE logo in the corner…Not even the colors are processed in the same manner… HanAssholeSolo’s GIF has an NTSC aspect ratio, because it was cut directly from a taping of analog Westlemania footage. Trump’s video has an aspect ratio of 16:9.”

Someone downloaded the GIF that HanAssholeSolo originally posted to Reddit. Then that person cropped it to better fit a video player like Facebook or YouTube. Then they went through the effort of syncing it back up with audio from the original clip. Then that person put it somewhere where Trump or one of Trump’s people could see it and download it. Then whoever found the video version had to get it to Trump’s phone.

Per CNN, a senior Trump administration official said that the video was not pulled from Reddit. Well, it looks like once again President Trump is telling the truth while Fraud News Network CNN gets caught posting FAKE NEWS!

On Monday, a senior administration official told CNN that the video was not pulled from Reddit. The White House still has not responded to a series of questions from CNN asking how the video ended up as a tweet from the President.

Dem State Senator Helps Pass Bill To Give Her Own Charity $1.5 Million... That Also Pays Her 6-Figure Salary