So peaceful. Meanwhile, the UN General Assembly condemned Israel for the recent violence in Gaza all while refusing to blame Hamas.

You can tell when Rama Lama Ding Dong (Ramadan) is over because the terrorists start in high gear with their shenanigans. The Israeli government reimbursed the farmers whose crops were damaged with tax money that was supposed to go to the Palestinian Authority.

Reports were swirling Thursday that Palestinians were preparing 5,000 kite and balloon bombs to launch from the Gaza Strip into Israeli territory to mark the end of Ramadan, according to the Jerusalem Post.

Israel Defense Forces said they were prepared to “prevent their use,” the news outlet reported — and Palestinians reported a drone launched a missile at people near the border fence who were flying balloons with Molotov cocktails attached.

According to the Jerusalem Post, unconfirmed reports by Israeli media claim Palestinians planned to launch 5,000 incendiary balloons and kites toward israel to mark Eid al-Fitr on Thursday night.

Gazans have been protesting at the border with Israel since March 30, tossing stones, Molotov cocktails and rocks toward Israeli troops and flying incendiary kites and balloons into Israeli territory, destroying more than 2,200 acres of fores… https://t.co/Fk8t7Pq8pc pic.twitter.com/ewDCgW4xqq

Last week for the first time, Palestinian demonstrators launched kites – and helium balloons, which can fly further – with explosive devices such as pipe bombs attached that are set off by cellphones once they approach troops. Last Friday, one of dozens of these devices exploded in the air above troops, causing no injuries.

“It looks romantic – a small boy is flying a kite, something that seems to be from a movie like Mary Poppins – but the truth is different. These are terror attacks, with IEDs, which are trying to harm Israel,” said IDF Intelligence Directorate head Maj.-Gen. Tamir Heyman on Wednesday at a closed-door forum at the International Homeland Security Forum in Jerusalem. 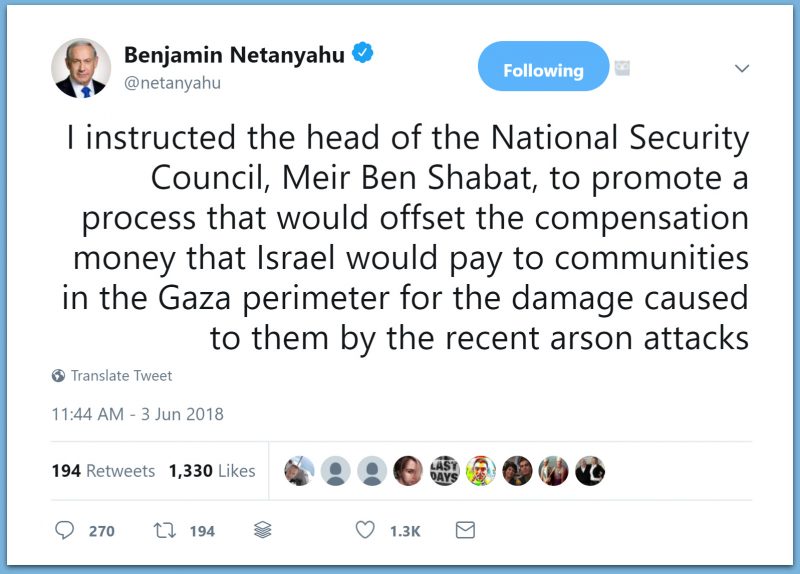 This Is How CNN Celebrates Father's Day...

Yes, The IG Report Did Find INSUBORDINATION & BIAS At FBI