Go get’em, Sarah! Someone needs to teach these SOB’s that there is a price for spreading their brand of BS! It’s about time they got sued for intentionally lying and defaming people. They should be held accountable for their fake reporting. Go, Momma Grizzley!

When Gabby Giffords was shot the MSM and Democrats only had praise and sympathy for her, but when Congressman Scalise was shot it was the complete opposite. No sympathy and people even came out hoping he died. 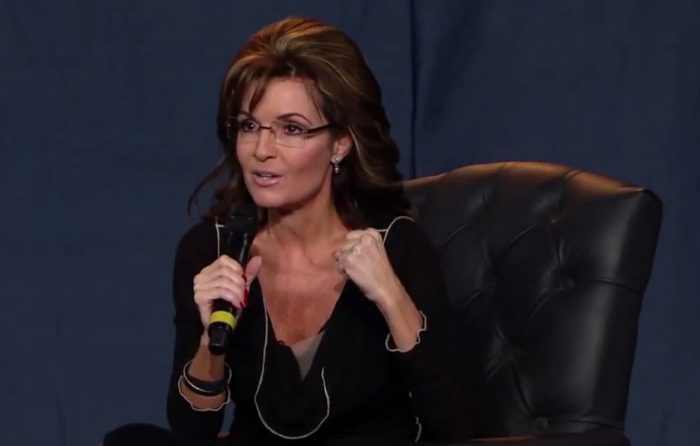 TGP: Sarah Palin is suing The New York Times for defamation, according to documents filed in federal court Tuesday that were obtained by The Daily Caller.

Peter Hassan from The Daily Caller:

The lawsuit has to do with an editorial the NYT ran on June 14 that falsely smeared Palin as inciting the 2011 shooting of Democratic Rep. Gabby Giffords by a mentally ill man. There is no evidence to support the NYT’s implication that Palin played a role in inciting the Giffords shooting.

“Mrs. Palin brings this action to hold The Times accountable for defaming her by publishing a statement about her that it knew to be false: that Mrs. Palin was responsible for inciting a mass shooting at a political event in January 2011,” Palin’s suit states.

“Specifically, on June 14, 2017, The Times Editorial Board, which represents the ‘voice’ of The Times, falsely stated as a matter of fact to millions of people that Mrs. Palin incited Jared Loughner’s January 8, 2011, shooting rampage at a political event in Tucson, Arizona, during which he shot nineteen people, severely wounding United States Congresswoman Gabrielle Giffords, and killing six, including Chief U.S. District Court Judge John Roll and a nine-year-old girl.”

As TGP previously reported, The New York Times revived their blood libel against Sarah Palin in order to equate Republican and Democrat behavior following the shooting of Congressman Scalise. In the original NY Times article, they blamed Palin for Gabby Giffords being wounded by a shooter:

Was this attack evidence of how vicious American politics has become? Probably. In 2011, when Jared Lee Loughner opened fire in a supermarket parking lot, grievously wounding Representative Gabby Giffords and killing six people, including a 9-year-old girl, the link to political incitement was clear. Before the shooting, Sarah Palin’s political action committee circulated a map of targeted electoral districts that put Ms. Giffords and 19 other Democrats under stylized cross hairs.

After the Arizona shooting the far left media went in overdrive to blame the shooting by a deranged killer to Republican rhetoric.

One in three Americans (35%) believe that Sarah Palin was responsible for the shootings in Tucson by an anti-Christian, anti-Constitution, left-wing, pro-Marx, antiflag, “quite liberal” lunatic who hated Bush.

Loughner was targeting Rep. Giffords for four years before the shooting.

Political Cartoon: Keep Her In!