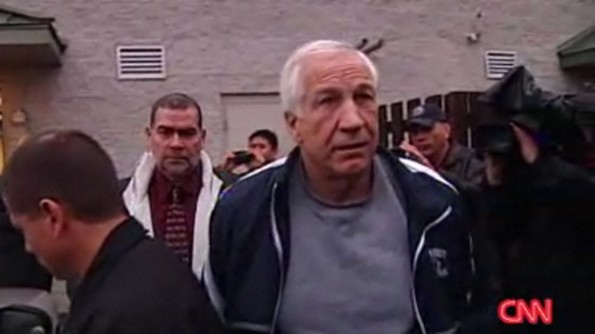 How many victims of Sandusky’s abuse would have been saved from their horrific experiences if one of the many people told would have just done something about it instead of worrying more about football?

Here are the other explosive details revealed in the documents, which were part of a civil suit.

‘I have a football season to worry about’

One victim, designated as John Doe 150, said he told Paterno that Sandusky had “put his finger in [the victim’s]rectum.” According to the victim, Paterno dismissed him, saying “I have a football season to worry about.”
“I was shocked, disappointed, offended,” the victim said. “I was insulted.”

Another victim, John Doe 75, was not interviewed for Sandusky’s criminal trial, but he described a 1987 incident in which coach Joe Sarra, also of Penn State, walked in when Sandusky had his hand down the victim’s pants.
“My mind was manipulated so bad that you think like some of this stuff is normal,” John Doe 75 said. “Like it’s scary.”

Another deposition included is from Mike McQueary, former Penn State assistant coach turned key witness in Sandusky’s trial. He testified that he observed Sandusky molesting a young boy in the Penn State football showers in 2001.
McQueary said he told Timothy Curley and Gary Schultz — two crucial members of the Penn State sports administration team at the time — what he had seen. He was contacted by the men after reporting the incident to Paterno.
New in this deposition, though, is that McQueary had also discussed the incident with coach Tom Bradley, who said “another assistant coach had come to him” with similar allegations in the 1990s, according to the deposition. That man was Greg Schiano, who went on to become the head coach of the Tampa Bay Buccaneers and later the associate head coach for the Ohio State Buckeyes.
Over the years, Bradley has repeatedly denied knowledge of any of Sandusky’s abuse. CNN has reached out to Schiano and Bradley for comment.
It’s unclear if Paterno knew about these additional coaches’ knowledge.
Curley and Schultz were also deposed as a part of the case. Both refused to answer most of the questions, citing their rights under the Fifth Amendment. More