LOL… Oxymoron: “Law-abiding, patriotic, illegal aliens.” The ones with the Mexican flags? Exactly what country are they being patriotic to Nancy?

ICE is the greatest enemy to the left, not the lawbreaking illegal aliens themselves. House Minority Leader Nancy Pelosi is now upset with ICE for abusing their power by arresting ‘patriotic’ illegals.

San Francisco, where Pelosi’s congressional district is located, is a “sanctuary city” that will not cooperate with the federal government in the enforcement of U.S. immigration laws.

“Since Sunday, ICE deportation officers have arrested more than 150 individuals who are in violation of federal U.S. immigration laws, working on leads developed by the local field office in conjunction with the National Criminal Analysis and Targeting Center (NCATC),” ICE said in a statement released Tuesday. 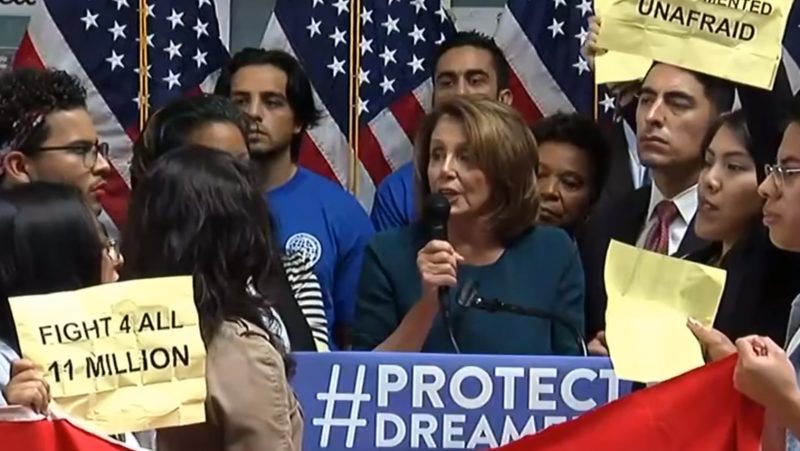 When she took to the House floor on Wednesday for a filibuster-style speech, House Minority Leader Nancy Pelosi thanked illegal aliens for having the “courage” to bring their children illegally into the United States.

During Pelosi’s remarks, she portrayed the parents of “Dreamers” as victims who have had to endure much “risk” to bring their families illegally into the country.

“I say to their parents: Thank you for bringing these Dreamers to America. We’re in your debt for the courage it took, for you to take the risk, physically, politically, in every way, to do so,” Pelosi said.

Funny in a very idiotic way. Every single illegal alien present in the United States is a criminal. What’s more, the only patriotism these people have is for their own home country.

@NancyPelosi Abuse of Power it’s called Enforcing the law sorry that you guys twist the law and don’t know how to get back !
We will show ya Sit &shut 🤐 and we will MAGA on !

Hmmm, I’m not sure how illegal aliens can be considered law abiding.#FridayFeeling

This twit would be hillarious if she wasn’t in Congress! https://t.co/PFEY1mdz18