Nancy, please lead by example or just leave the stage. All you have done, aside from saving yourself some “crumbs” is show the world your true colors. I thought you were pro-rich people paying more on their taxes so poor people didn’t have to? I guess not.

Democrats love pushing the class warfare narrative and demanding that the rich pay their fair share… Well, that’s until it’s their fair share that they’re being expected to pay personally. Hypocrites! 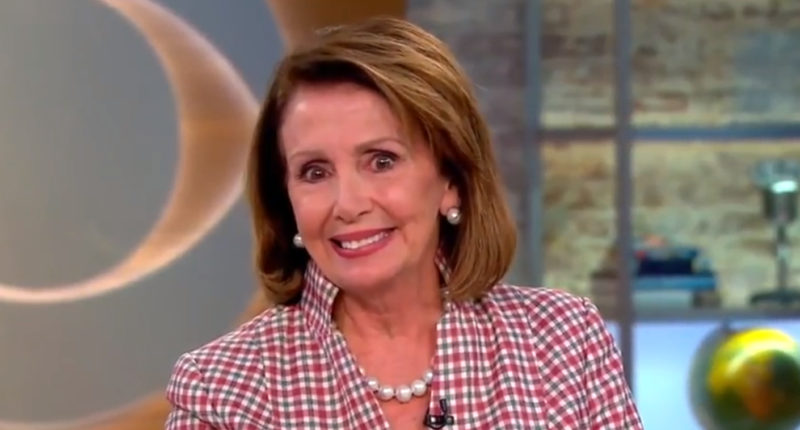 A review of House Minority Leader Nancy Pelosi’s financial records appears to suggest that the real reason she voted against the GOP’s tax reform bill last month was not to protect working-class Americans, as she claimed, but to protect her own interests.

According to The Washington Free Beacon, Pelosi’s records show that she owns three multi-million-dollar homes, two of which are in liberal California. Moreover, the combined 2017 property tax bill for these homes was reportedly $137,000.

This brings us to the tax reform bill that the GOP-led House and Senate passed in mid-December and President Donald Trump signed promptly afterward.

That bill, which as a reminder cuts taxes for 90 percent of all Americans, contains a provision that limits the amount of state, local and property taxes the wealthy may deduct to just $10,000.

Because this provision means that the wealthy residents of high-tax liberal states will undoubtedly pay more on their taxes starting in 2018, some rich people have been trying to game the system by prepaying their property taxes.

“(S)ome states and localities allow people to prepay their state and local taxes, including property taxes. If they did so this year, people could conceivably deduct them from this year’s taxes,” The Washington Post explained late last year in a guide sheet it prepared for its wealthy readers.

Now guess who decided to pull this exact trick. That’s right, Nancy Pelosi, i.e., the woman who claims to be a champion for working class Americans and constantly rails against the wealthy for allegedly not paying their “fair share.”

“Just days after President Trump signed the sweeping tax bill into law late last month, Pelosi and her husband tried to preserve $64,000 in property tax breaks, known as the state and local taxes (SALT) deductions, for her two California homes,” the Beacon reported.

She accomplished this by prepaying the property taxes on a $7.2 million estate she owns in San Francisco and a $4.0 million residence she owns in Napa.

She also reportedly paid the property taxes on her third multi-million-dollar home, a condo that resides in Washington, D.C. Read more at CT.