Anonymous Street artists moved out to highways once again to ring in the new year by posting messages to the “Welcome to California” highway signs.

The signs were put up north of Lake Havasu, Arizona, Primm, Nevada and on Highway 95 in California and read 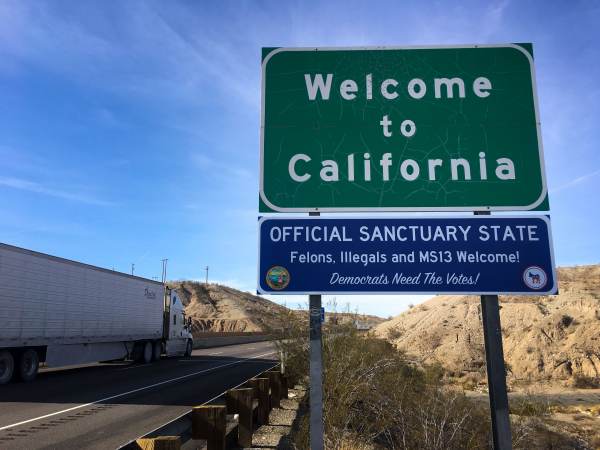 NOTE: It is unclear who originated this action.

One passerby took this…

Dead accurate. Any place giving refuge to illegal aliens is an open invitation for the worst of the worst to come from around the world to live free of fear of being deported. Vigilantes from foreign countries will cross the border and seek refuge in these places. Illegal immigrant Women will cross the order pregnant to give birth and get benefits for herself and her new citizen baby. Not to mention free healthcare, child birth, wic, and your even allowed to get your drivers license how’s that? Sounds like paradise for any non citizen. As California plunges to the highest poverty state with 1.5 trillion in debt. Crumbling dams, roads, and bridges. Graffiti everywhere in nature, you can’t go for a hike without seeing it in our national forests, on rocks on boulders, creeks, trees on walls, bridges, schools trains, bathrooms. But you won’t hear the new residence complaining. It’s better than the third world hell hole they came from and they are bringing their family, friends, diseases, and backward culture with them. Say hello to your new neighbors California! Slave labor has returned to America in a different form! Future permanent democrat voters! They are more important to your “leaders” than you! Don’t believe me read the facts—-V https://fairus.org/issue/publications-resources/fiscal-burden-illegal-immigration-california-taxpayers #2ndamendment #backtheblue #fakenews #democrat #military #patriot #alllivesmatter #president #libtards #liberallogic #draintheswamp #supportourtroops #gun #constitution #capitalism #mikepence #teaparty #mattis #trumppence #guns #donaldtrump #freedom #liberty #veteran #prolife #goptaxscam #iran #taxplan #hillaryclinton #freeiran

Hollywood Reporter: A faux welcome sign was posted Tuesday by an unknown artist, touting, “Cheap Nannies and Gardeners Make Malibu Great!”
An unknown artist has pranked the city of Malibu with a faux sign posted underneath the official city limits marker on the Pacific Coast Highway.

The Los Angeles County Sheriffs department told The Hollywood Reporter that the city has not filed an official report and no investigation into the sign is currently taking place.

Reva Feldman, Malibu’s city manager, called it an “unfortunate prank” and said that authorities were “working on it.”

Official Sanctuary State signs posted up at California border by someone pic.twitter.com/RDAcYtSWUF