What a moron. She completely fell for Trumps’s bait. When are they going to learn that President Trump absolutely loves and enjoys triggering leftist lunatics?

After all those decades of covering up and looking the other way for Bill Clinton while Hillary slut-shammed & worse to the women involved they now they are suddenly outraged? Why are Democrats are only focusing on possible interpretation?  Well because they always accuse others of things they do themselves… 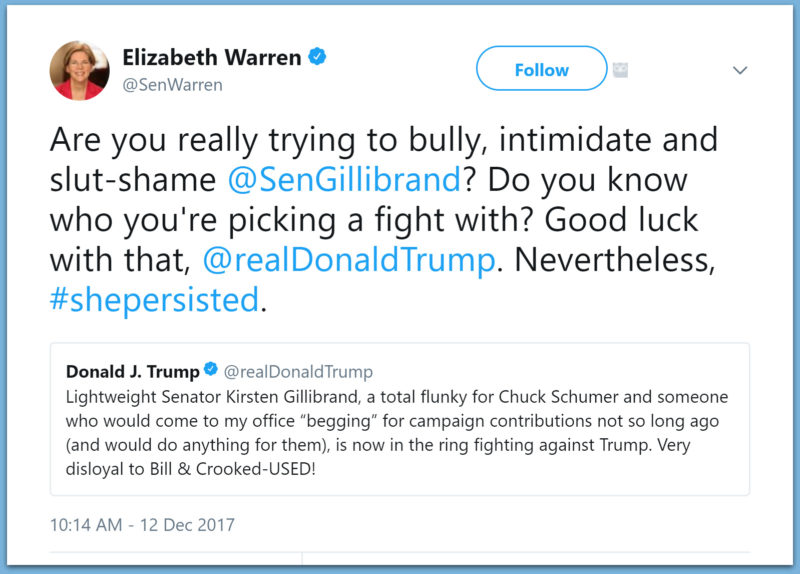 The New York senator hit back at Trump Tuesday morning, saying that he “cannot silence” her and she will continue to speak out about the shame Trump “has brought on the Oval Office.”

Gillibrand called on Trump to resign late Monday, or go through a congressional investigation for the “assault allegations” against him. The tweet is likely a response to her statement.

Time: The Trump tweet also led to other Democratic lawmakers taking on the president, with Massachusetts Sen. Elizabeth Warren calling Trump’s remark that Gillibrand “would do anything for” donations “slut-shaming” and Connecticut Sen. Richard Blumenthal calling it a “sexist slur.”

Washington Post: Several female senators also rallied around Gillibrand, including Sen. Elizabeth Warren (D-Mass.), who pointedly asked Trump on Twitter whether he was trying to “bully, intimidate and slut-shame” Gillibrand.

In other words, they felt the need to defend Democrat Sen. Kirsten Gillibrand from “slut shaming.”