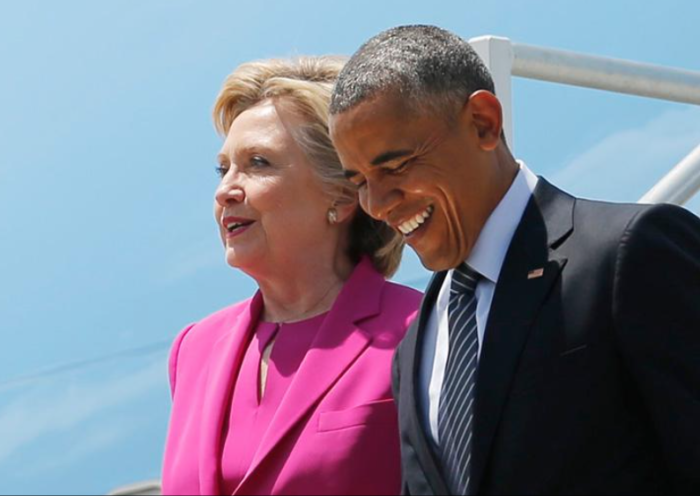 They were never going to prosecute Hillary because they found that Obama had been handling classified information the same way.

With the president’s knowledge — and involvement — in Hillary’s private e-mail scheme, it’s clear there was never going to be a prosecution.

Among the most noteworthy of the hacked e-mails from John Podesta’s accounts is an exchange in which Podesta consults Clinton consigliere Cheryl Mills about the private e-mail exchanges between President Obama and then-Secretary of State Hillary Clinton.

As readers may recall, I have long maintained (see here and here) that the principal reason why Mrs. Clinton was not prosecuted, despite a mountain of evidence that she committed felony mishandling of classified information, is the fact that Obama engaged in the same kind of misconduct. The president’s use of a private, non-secure channel to discuss sensitive matters with high level officials may not have been systematic, as Mrs. Clinton’s was. (Obama’s disturbing use of an alias, however, suggests that Clinton was not the only one he was privately e-mailing.) Nevertheless, the fact that the president was e-mailing Clinton means he not only participated in her misconduct but also that the Obama-Clinton e-mails would have been admissible evidence in any criminal trial of Clinton.

For the parties to prove such culpable conduct on the president’s part in a high-profile criminal trial would have been profoundly embarrassing to him, to say the least. Therefore, it was never going to happen. As I’ve noted before, after exclaiming, “How is that not classified?” upon being shown an Obama-Clinton e-mail by the FBI, Hillary’s confidant Huma Abedin asked agents if she could have a copy of the exchange. She obviously realized that if Obama had been communicating on Clinton’s non-secure server system, no one else who had done so was going to be prosecuted for it.

We now know that Podesta was very concerned about the Obama-Clinton e-mails and turned to Mills for advice. His succinct e-mail to Mills is dated March 4, 2015 (at 8:41 p.m.), and he entitled it “Special Category.” He stated: Think we should hold emails to and from potus? That’s the heart of his exec privilege. We could get them to ask for that. They may not care, but I [sic]seems like they will. More