Way to go Poland, stand tall and stay strong, you are doing the right thing because frightening numbers are being quoted.

50 million immigrants is an invasion. No wonder Trump insinuated we might not honor Article 5? If these people are stupid enough to let this many people into their country then it would turn into a huge mess. 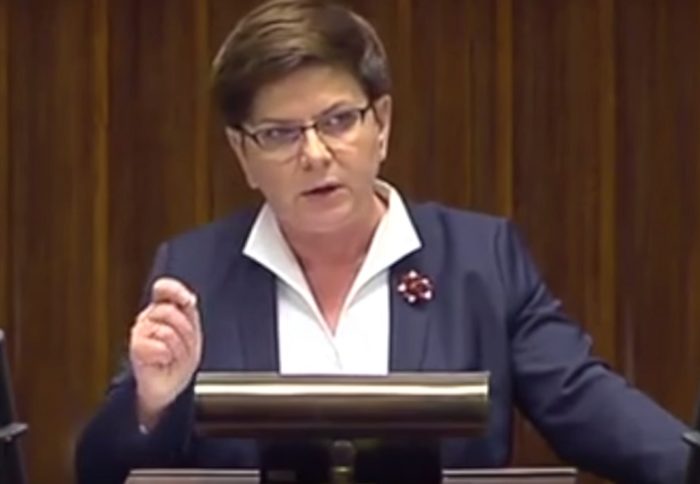 ‘’Poland will not submit to any blackmail on the part of the European Union’’, Szydło stated during a parliamentary debate, adding that her Central European nation would not be participating in the ‘’madness of the Brussels elites.’’

Referencing the Islamist suicide bombing which killed 22, mainly children, and injured dozens more at a pop concert in Manchester this week, the Catholic prime minister said she had the courage to call out the EU’s political elites on their ‘’folly’’.

Two Polish citizens were amongst those killed on Monday night’s atrocity in Manchester.

‘’Where are you going, Europe? Get up off your knees. Get out of your lethargy. Otherwise, you will be crying every day for your children’’, she warned, stating that Poland had no intention of accepting Brussels-imposed migrants.

Szydło also accused her liberal opposition of supporting EU migrant policy, and in doing so ‘’going hand in hand with those who point a gun at Europe, at us all.’’

Only last week, the European Commission again warned Poland of ‘’consequences’’ if it continued to refuse to take in migrants from camps in Italy and Greece, a decision which the previous government was set to implement. Since Szydło’s Law and Justice Party came to power in October 2015, however, they have refused to resettle one single migrant, frustrating and infuriating Brussels.

Poland, Hungary, the Czech Republic and Slovakia, forming the so called Visegrad Group, all oppose the imposition of migrants on their territories. The four countries refuse to follow the example of their Western European neighbors whose societies have been transformed by decades of mass immigration, accelerated by the latest wave of migrants from the Middle East and Africa. More