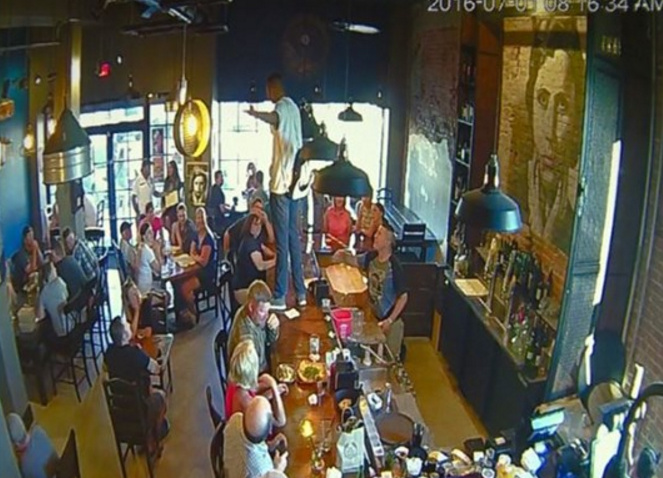 KTVB: Customers at the Horsewood’s Restaurant in Caldwell were panicked Friday night after a drunk man got up on the bar and praised Allah as the only god.

The incident happened at around 8:15 p.m. Friday night, according to Caldwell Police.

Lt. Joey Hoadley tells KTVB that officers were on scene less than two minutes after receiving the call.

Horsewood’s owners, Jessie and Aaron Horsewood, explain the event as surreal. They say the young man had been sitting in the bar for awhile when he suddenly climbed up on top of the bar, told everyone to be quiet, and yelled, “Allah is the only one true god.”

The Horsewoods say customers immediately bolted out, running to every door in the restaurant.

“It was surreal,” Jessie Horsewood said. “There were purses left on chairs, cell phones left on tables.”

They say Bell was wearing a backpack and it worried customers that he was carrying a weapon.

The Horsewoods, along with the bartender and several other staff members, pulled the man, Ralmanzow Bell, 21, down from the bar and outside.

“All this is going on real fast and I”m just trying to get him away,” Horsewood’s bartender, Christopher Ozuna, told KTVB.

Ozuna ripped Bell’s backpack off and staff members proceeded to tackle Bell to the ground outside, holding him there until police arrived.

“We had to react in the way that we did,” Aaron Horsewood, said.

Caldwell police say customers were fearful of the backpack Bell was wearing and thought he might have had a weapon on him.

“That’s what panicked people,” Lt. Hoadley said. “Not necessarily what he was saying- that maybe contributed to it- but that, along with a backpack, and then people saying he had a gun. It startled people.” More