Potential attack or just a random drunk Texas guy? No name or backstory yet.

The Hyatt Regency is preparing its own New Year’s Eve celebration at the hotel with a 50,000 balloon drop at the stroke of midnight…

KSAT: A man has been arrested on multiple charges after police located a small arsenal of guns on the top floor of the Hyatt Regency on Louisiana Street downtown, Houston police said. 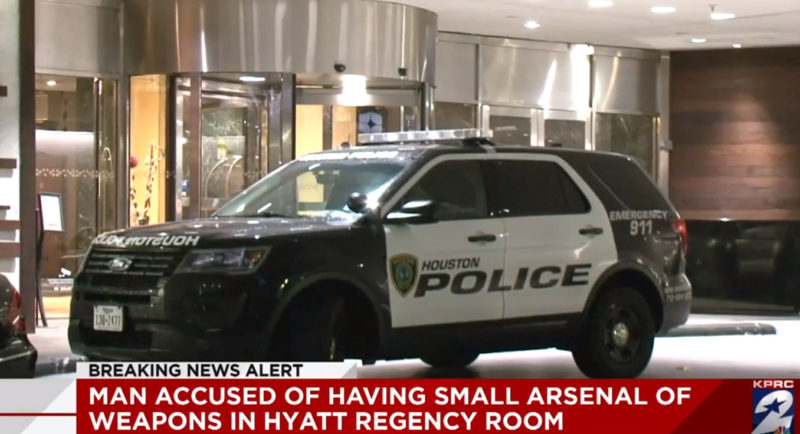 Police at the hotel called for backup around 1:30 a.m. Sunday after they attempted to arrest the man for being intoxicated and trespassing. When help arrived, police noticed ammunition laying around the man’s hotel room, Lt. Gordon Macintosh with Houston police said.

The man was arrested for unlawfully carrying a weapon and trespassing. When investigators looked into his room further, they located an AR-15, a shotgun, a handgun and lots of ammunition, Macintosh said. More

Situation from this morning at downtown hotel is contained. No specific threats to @HoustonTX. @houstonpolice will be heavily deployed throughout the city to include SWAT react teams. Proud of officers & Hyatt. As always be vigilant & report suspicious a activity to authorities.

Hyatt suspect interview concluded. Placed firearms in hotel room for safekeeping while. Based on limited amount of ammunition, interview & other investigative findings no unlawful intent found. Suspect has been booked & charged with assaulting Peace Officer & trespassing.