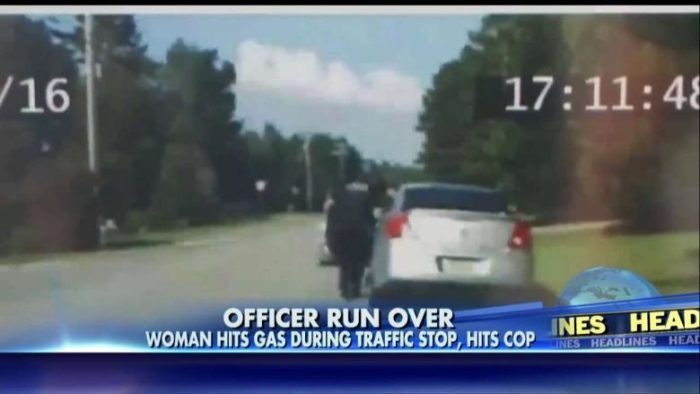 Hopefully this police officer recovers quickly and fully. Luckily the woman was caught this morning and is now in police custody.

A police officer was brutally injured after a woman he stopped ran over him with her car.

The hit-and-run happened Saturday in Barrow County, Georgia, Heather Nauert reported on Fox and Friends, and the dramatic footage was caught on police dash cam.

Officer Marc Lofton of the Statham Police Department pulled over 28-year-old Jessica Fox for speeding and discovered she was wanted on a drug-related warrant, according toWAGA.

When he tried to arrest her while standing astride her open car door, she hit the accelerator and dragged the lawman across the road before running over his legs and speeding off.

Lofton suffered a concussion and severe leg injuries and was released from the hospital on Monday.

Fox was on the run for a few days, but was taken into custody this morning, FOX Atlanta reported.

Lofton told the station that the woman made him “super nervous” reaching around her vehicle after she failed to immediately pull over.

He said he asked Fox to exit the vehicle and then she gave him a false name.

“[I] tried to put her in handcuffs; she pulled away from me and got back in the vehicle. I pulled out my Taser at that point of time. She was sitting in the driver’s seat and I told her multiple times, ‘I have a Taser. Please get out of the car,’ and that she was under arrest,” said Lofton. “After multiple commands, I deployed the Taser,” he explained.