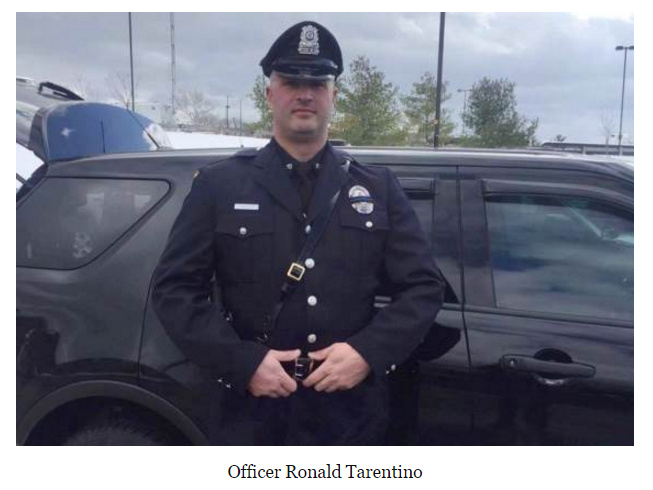 Rest in peace officer. I pray everyday for all officers safety. This admin. has turned cop killing into a sport. 99.9 percent of all officers do their jobs with little incident. Condemning all police officers for the actions of a few has created an environment where officers are forced to second guess themselves. It takes less then a second to determine threat levels now officers hesitate and they get killed. Obama you own this!

Breitbart: Police in Auburn, Massachusetts, are searching for a suspect after a local police officer was shot in the chest, multiple times, and killed. The shooting occurred during a traffic stop in the early-morning hours on Sunday.

Auburn Police Officer Ronald Tarentino stopped a vehicle on a residential street at about 12:30 a.m. Sunday morning. The occupant of the vehicle shot the officer multiple times in the chest and fled the scene, the Associated Press reported.

Tarentino, 42, was transported to UMass Medical Center in Worcester for treatment. He was pronounced dead at the hospital.

Auburn Police Chief Andrew Sluckis declined to provide any information about the shooter at this time, the AP reported.

“We will leave no stone unturned in our investigation to determine who was involved,” Sluckis said.

The officer is a three-year veteran of the department. His chief called him a “dedicated and brave public servant.” Tarentino leaves behind a grieving widow and three children.

Following his death at the hospital, officers and fire fighters lined up to honor the fallen police officer and pay their respect. His body was escorted by a convoy of police vehicles while being transported to the medical examiners office. More