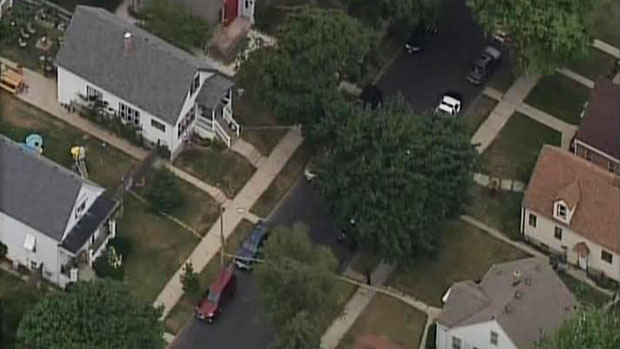 A Milwaukee police officer was shot in a “vicious” attack early Sunday as he sat in his squad car while colleagues investigated a domestic disturbance call, an official said.

The suspected shooter, identified by police as a 20-year-old West Allis man with two felonies on his record, was found dead in a nearby yard, they said.

The incident began as a response to a domestic disturbance call near South 17th Street and West Morgan Avenue at about 2 a.m. During that investigation, someone fired shots into the squad car, striking an officer “multiple” times,” Asst. Police Chief William Jessup said in a morning press conference.

The officer, a 31-year-old man with 13 years of service, was taken to Froedtert Hospital for surgery. Milwaukee police Sergeant Tim Gauerke said the injuries were not life-threatening.

“This is just another example of the risks our officers take each and every day to protect these citizens,” Jessup said.

While investigating that shooting, officers on the scene heard gunshots and discovered the body of a young man in a nearby yard, Jessup said.

That man is the same person who was involved in both the domestic incident and the shooting of the police officer, police said.

He said it appeared that man’s death was a suicide.

Neighbor Katie Kalski said she heard two gunshots and expressed shock by the violence near her home.

“This neighborhood — stuff like that doesn’t happen. We live in a pretty safe neighborhood. So for something like this to happen — it’s bad. It’s terrible,” she said.

Scott Hansen left his home near the scene to find out what was going on. Officers, at first, believed Hansen to be the shooting suspect. Later, they allowed him to return home.

“It was tense, and they handled it well,” Hansen said. “Absolutely, I want to thank the police for putting their lives on the line for us and being out there and protecting us each and everyday.” More