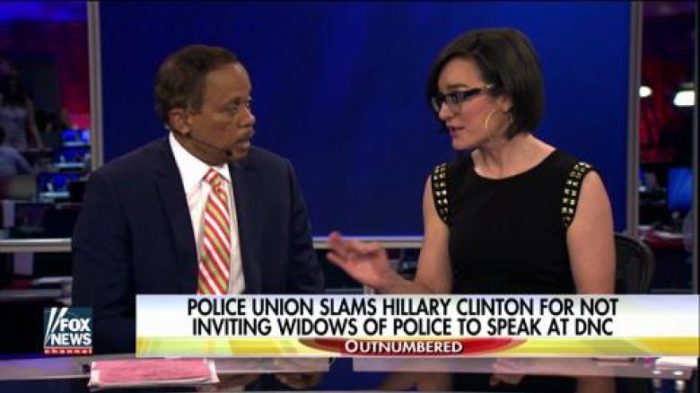 Hillary is fueling the racial tension and the hatred against police. Our leaders need to step up and set an example for unity.

The Democratic National Convention is set to hear from the families of African-Americans killed by police, including the mothers of Eric Garner and Michael Brown.

Attendees will also hear from the mother of Trayvon Martin, but a police union and others are calling out Hillary Clinton for not inviting the widows of police officers killed in the line of duty to also speak.

John J. McNesby, President of Philadelphia Lodge #5 of the Fraternal Order of Police, said the speaking list is “insulting.”

“It is sad that to win an election Mrs. Clinton must pander to the interests of people who do not know all the facts, while the men and women they seek to destroy are outside protecting the political institutions of this country,” he wrote.

“Mrs. Clinton you should be ashamed of yourself if that is possible.”

The Clinton campaign defended the speaking choices, noting that two members of law enforcement will be speaking at the convention.

A campaign spokesperson said Clinton has repeatedly stated that Americans must “support heroic police officers” while also listening to the mothers who have lost children.

Watch the Outnumbered discussion above.