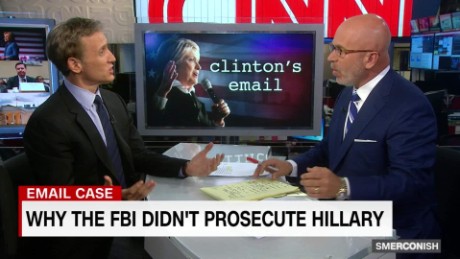 A majority of Americans say they disagree with the FBI’s decision not to recommend criminal charges against Hillary Clinton for her use of a private email server while she was secretary of state, according to a new poll.

A Washington Post/ABC News poll, released Monday, found that 56% of American adults disapprove of the FBI’s decision, while 35% said they approved. But a majority — 58% — also said the issue would not affect their vote in the 2016 presidential election.
Opinions on the FBI’s decision were sharply divided along partisan lines. According to the poll, nearly 90% of Republicans said Clinton should have been charged, while only about 30% of Democrats said the same.
Republicans were most likely to say the non-indictment would affect their vote in the presidential election — 47% say it makes them less likely to support Clinton, compared to 10% of Democrats. Independents were more split, with 58% saying the issue made no difference for their vote and 33% said it made them less likely to support Clinton.

Last week, FBI director James Comey announced that the agency would not recommend that the Justice Department pursue criminal charges related to Clinton’s use of of a private email server during her term as Secretary of State, capping a year-long investigation into the matter that has roiled the presumptive Democratic presidential nominee’s White House bid. Attorney General Loretta Lynch accepted the recommendation of the FBI not to bring charges.
The Washington Post/ABC News poll was conducted July 6-7 and surveyed a random national sample of 619 adults. The margin of error is +/- 5 points.