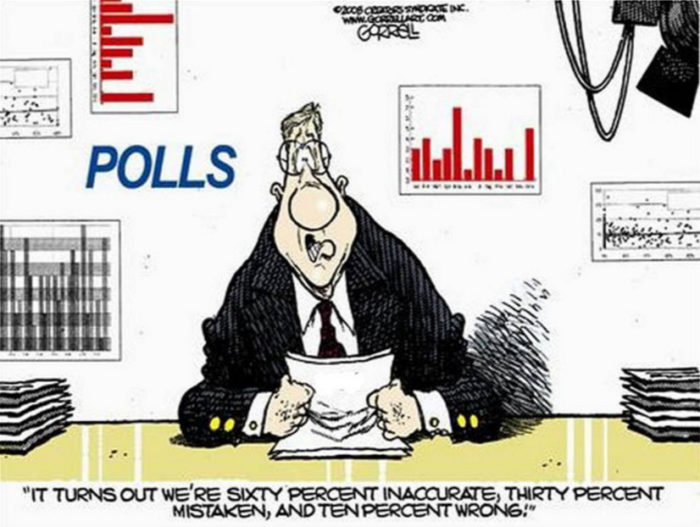 Pollsters? The media tried to shape the narrative as the electorate rejected it. The main-stream media are really just a big joke. Pollsters learned nothing from Brexit. Polls are no longer predictive mechanisms. They are just only propaganda tools.

Pollsters and election modelers suffered an industry-shattering embarrassment at the hands of Donald Trump on Tuesday night.

Trump had long said the polls were biased against him. His claims – dismissed and mocked by the experts – turned out to be true.

Going into Election Day, a strong majority of pollsters and election modelers forecast that Hillary Clinton would coast to victory, with many predicting she would sweep the battlegrounds and win north of 300 electoral votes.

The final University of Virginia Center for Politics model had Clinton winning 322 electoral votes to 216 for Trump, with Clinton winning Florida, North Carolina, Pennsylvania, and Wisconsin – all states that she lost.

Liberals lashed out at data guru Nate Silver for giving Trump a 35 percent chance of victory heading into Election Day, claiming he was putting his thumb on the scale for Trump by making the race appear closer than it was.

Of the 11 national polls to be released in the final week of the race, only two – a Los Angeles Times-USC survey and one from IBD/TIPP – showed Trump with the lead.

The L.A. Times survey was criticized as “experimental” by industry experts for polling the same pool of people and for the way it weighted black voters.

But for the second consecutive presidential cycle, the L.A. Times and IBD/TIPP surveys were among the most accurate, making them the gold standard going forward.

The rest of the polls showed Clinton with leads of between 2 points and 6 points, boosting the Democrat to a 3.3 point national lead in the RealClearPolitics average.

And the battleground data was just as biased against Trump.

There were no surveys released this year from Wisconsin that showed Trump with a lead.

Clinton held a 6.5 point lead in the Badger State heading into Election Day, and the state was not even discussed as on par with Michigan or Pennsylvania as a potential blue state pick-up for Trump.

Trump’s victory in Wisconsin — a state that has not gone for the GOP nominee since 1984 — helped him seal the deal.

Pollster John Zogby believes that many in the industry weighted their polls too heavily in favor of Democrats, pointing to polls that had an 8 to 9 point advantage for the party, when it should have been in the 4 to 5 point range, he said. More