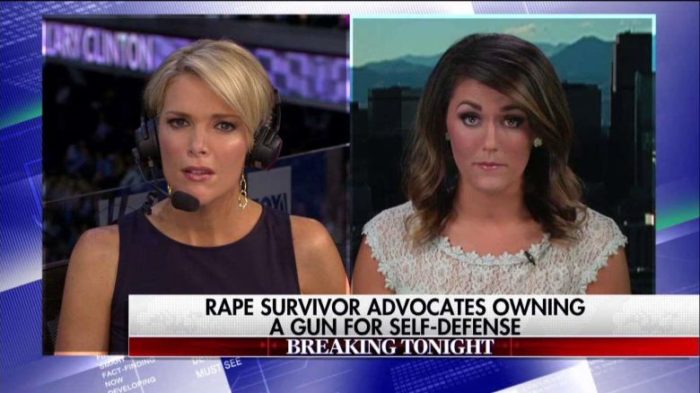 Rape Survivor Kimberly Corban advocates owning a gun for self-defense because no one is going to be as responsible for your personal safety as yourself.

Rape survivor Kimberly Corban is featured in a powerful new NRA ad, slamming Hillary Clinton for her views on the Second Amendment.

“My fear of firearms disappeared when I got my second chance at life,” Corban says in the ad. “Self-defense is your right. Don’t let it be taken away.”

On “The Kelly File” tonight, Corban told Megyn Kelly that she realized after the harrowing assault that she needed to take control of her own safety and protect herself.

In particular, she was told that she could no longer carry a concealed firearm on the University of North Carolina at Chapel Hill campus, where she was a graduate student.

She said she’s not as worried about massive changes to the Second Amendment, but small, incremental changes that chip away at one of our fundamental rights.

“Now, we’re being told, ‘Trust Hillary. She’s going to make sure that you are kept safe.’ And if there’s anything that I’ve learned in the last ten years, it’s that no one is going to be as responsible for my personal safety as myself.”