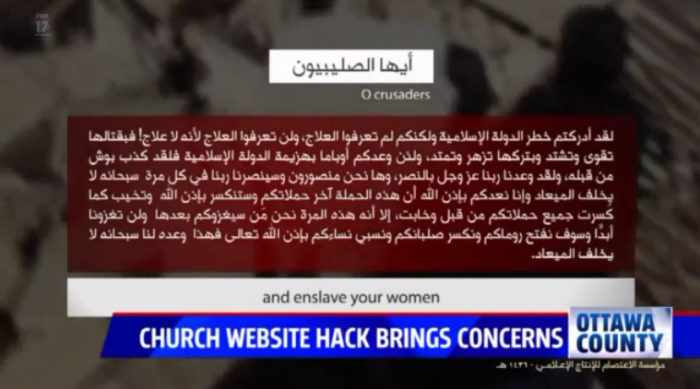 On Sunday, Fox17 reported that a group claiming to be a cyber army for ISIS took credit for hacking and defacing the website for the Lamont Christian Reformed Church in Lamont, Michigan.

The defacement was discovered by 15-year-old Elizabeth Storteboom who was looking for a phone number but was presented with a different message:  “You have been hacked by the United Cyber Caliphate.”

“I clicked on the website and all of the sudden this video pops up, and I’m like, what is going on?” she said. The video played, declaring: “We will conquer your Rome, break your crosses and enslave your women by the permission of Allah, the Exalted.”

“It just started playing, and I was reading the bottom, and it was talking about crazy things. I called my dad in, and said he needs to see this. I covered the camera, because I was super scared there for a second.”

“It was just talking about hating Christians and how Allah was God and everything,” said Storteboom. “I was just confused. They were talking about taking women and children and stuff.”

The same group has been hacking websites since 2014, including some military online databases.

The site was fixed by Saturday afternoon and the church has been in contact with the FBI.  It’s not known if the hack was a prank or not, Fox said, and the church doesn’t see it as a serious threat.

Nevertheless, the attendance to the church’s next sermon was only six people. More