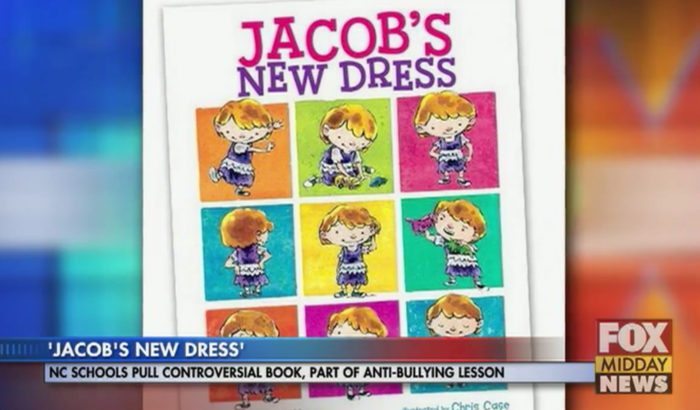 Every sane parent in that school district should be pulling their kids out until the administrators are fired. Is this school sanctioned attempted child abuse?

Public pressure has forced far-left officials at the Charlotte-Mecklenburg school district (CMS) to withdraw a pro-transgender book for first-grade kids — but the officials are now mandating a book with a disguised version of the same pro-transgender message.

A teacher raised concerns about the transgender-validating book, Jacob’s New Dress, at a school board meeting. The book celebrates a young boy who wears dresses to school, and it stigmatizes boys who urge their peers to wear boys’ clothes. After lawmakers in Raleigh heard the concerns, the book was removed from the “anti-bullying” curriculum — but it was replaced with Red: A Crayon’s Story, which focuses on a red crayon that believes itself to be blue, reports WFXB.

But both books are included in the campaign known as Welcoming Schools by the LGBT advocacy group Human Rights Campaign, an effort to help elementary schools become “LGBTQ-inclusive” and “gender-expansive.”

[…]Other books, including “Toni the Tampon,” push the same transgender claim that a person’s sex is changeable, regardless of biology.

“The purpose of our elementary schools is to teach writing, reading, and arithmetic, not to encourage boys to wear dresses,” Tami Fitzgerald, executive director of NC Values Coalition, said in a statement.

“I read the book online,” she told the New York Times. “It’s clearly geared to young children. The book is meant as a tool of indoctrination to normalize transgender behavior. I think a lot of parents would object to that.”

Schools should be focused on helping young children to achieve the building blocks of learning, not indoctrinating them in progressive social values, she said in her statement. More