There’s no accountability in today’s school system. Once you have tenure you’re set for life, and its nearly impossible to get rid of you.

It is very important to have a typical liberal remind us that the rest of us how sane and logical the deplorable really are.

On Tuesday, a professor at Fresno State made highly outrageous comments celebrating the death of former First Lady of the United States Barbara Bush as she also took delight in the pain that George H.W. Bush is experiencing as a result of his wife’s death.

According to her bio page at Fresno State, “Professor Randa Jarrar is an award-winning novelist, short story writer, essayist, and translator” and serves as the “executive director of RAWI, the Radius of Arab American Writers.”

Jarrar’s first tweet on Bush’s death stated: “Barbara Bush was a generous and smart and amazing racist who, along with her husband, raised a war criminal. F**k outta here with your nice words.” 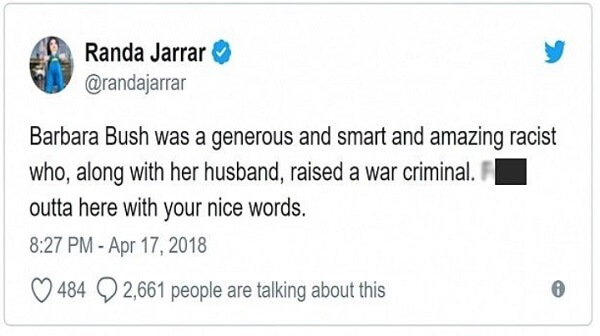 Jarrar continued, writing: “PSA: either you are against these pieces of shit and their genocidal ways or you’re part of the problem. that’s actually how simple this is. I’m happy the witch is dead. can’t wait for the rest of her family to fall to their demise the way 1.5 million iraqis have. byyyeeeeeeee.” More 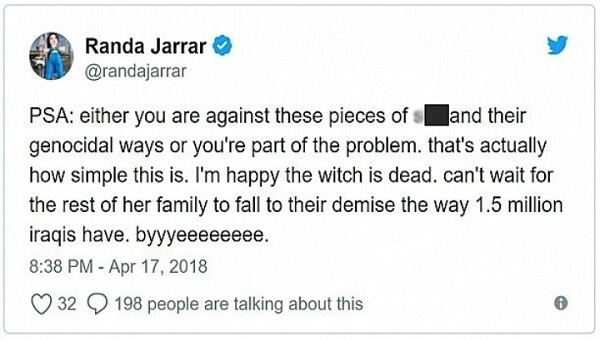 ““We share the deep concerns expressed by others over the personal comments made today by professor Randa Jarrar, a professor in the English Department at Fresno State.” https://t.co/xp7b8Xn25T

It’s sad that someone can be so empty and vile that they rejoice in the death of a woman like Barbara Bush. How dark must your soul be?

This is an example of the people who are teaching the next generation what and how to think.

When did people become so shamelessly vulgar?@Fresno_State you should be embarrassed to have such faculty as Professor Randa Jarrar @randajarrar nothing to do with politics just human decency.

Obama SLAMMED For Tweet Linking Uvalde To George Floyd — But Here’s What Critics Are Missing…
May 26th, 2022 Clash Daily

Cartoon of the Day: Above Their Fray
May 28th, 2022 Conservative Firing Line
SHARE