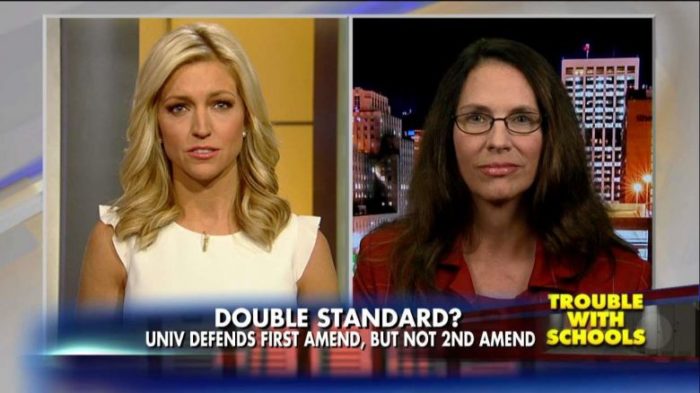 This professor just wants the same rights to the 2nd amendment that they are giving to students with the 1st amendment. What is so wrong with that?

A professor in North Carolina is calling out East Carolina University for what she sees as a double standard when it comes to freedom of speech versus gun rights.

Dr. Traci Tuten spoke out after 19 East Carolina band members kneeled during the national anthem before a home football game earlier this month.

Many fans responded later by booing the marching band during its halftime performance.

The university did not discipline the students for breaking school rules, pointing to the First Amendment and the “free exchange of ideas” on a college campus.

But Tuten said on Fox & Friends today that despite once being a victim of stalking on campus, state law prohibits her from carrying a legally-owned firearm on campus.

“When the students broke those rules and the university said it was their First Amendment right, I realized this was an opportunity for us to emphasize all of our rights and I should also have my Second Amendment rights to be able to carry on campus,” said Tuten.

She added that she’s received no response from the university, but is meeting with local and state legislators about changing the law.

Tuten said people like herself, who are trained in the use of firearms, can respond much faster than police in a potential mass shooting on campus. She explained she will not carry her gun on campus as long as it remains illegal.

“I won’t do anything that would cause me to lose my rights as a citizen. I’m too eager to vote for Mr. Trump,” said Tuten.

Watch the interview above and let us know your thoughts.

State Dept: Hillary Didn't Turn Over Emails Between Herself And Obama