Uh-oh. Now the MSM will have to “de-canonize” Pope John Paul II. Just watch, they’ll call him a hate-filled Islamophobic in 3…2…1…

A never before published prophecy attributed to Pope John Paul II has been revealed by a close confidant of the former pontiff during a memorial lecture on his life, the contents of which could cause scandal within the increasingly liberal and politically-correct Vatican. 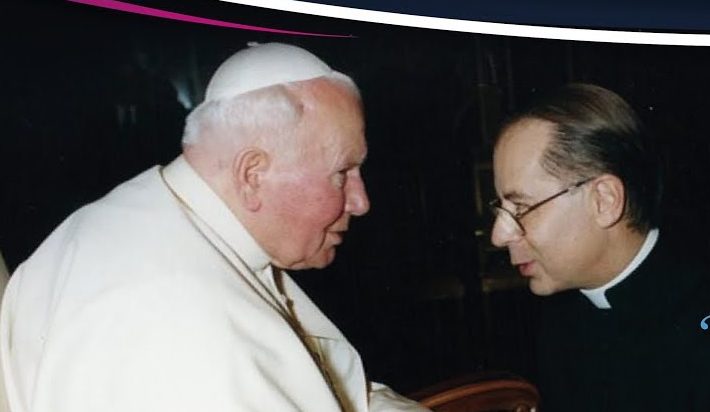 Speaking in Italy on October 22nd, Monsignor Mauro Longhi from Trieste, an Opus Dei prelate and for ten years a member of the Vatican’s Congregation for the Clergy, was still a student when he accompanied the Polish pope on summer retreats into the Italian Alps in the 1980s and 90s.

Born Karol Wojtyła in Poland, John Paul II was known for his love of hiking and skiing.

It was during one such mountain retreat in the early 1990s at Bienno, Northern Italy, that the Italian priest claims to have been told of a troubling vision by the pontiff.

“I had looked at him thinking that he might need something,” the longtime friend of John Paul II explained as part of a series of recollections and anecdotes on their friendship, “but he realizes that I am looking at him; he has the shiver in his hand. It was the beginning of Parkinson’s.’’

“Dear Mauro, it is old age”, John Paul joked, before becoming more serious in tone and voice, according to the then student priest, going on to explain his vision.

‘’It is called Islam. They will invade Europe. I have seen the hordes surging from the West to the East, from Morocco to Libya, from the Oriental countries towards Egypt.’’

“They will invade Europe. Europe will be a cellar; old relics, twilight, cobwebs. Old family souvenirs. You, the Church of the third millennium, must contain the invasion. But not with weapons. Weapons will not be enough, but with your faith, lived with integrity.”

Emerging from the Italian and French blogosphere in recent days, the story featured in Italian daily, La Stampa, Tuesday, with an article appearing in its Vatican Insider website.

The Turin-based newspaper, at pains to point out John Paul II’s commitment to inter-faith dialogue and bridge-building with the Muslim world, reports that Monsignor Longhi was unaware that his speech was being filmed and is saddened by the ensuing controversy.

The revelations are unlikely to be welcomed by Pope Francis, a liberal on migrant policy, frequently on the receiving end of criticism from conservatives for holding ”naïve” views on immigration into western nations.

Conservative Catholic La Nuova Bussola Quotidiana points out that in his 2003 Apostolic Exhortation, Ecclesia in Europa, the late Pope John Paul II counseled rather that the relationship with Islam must be “prudent“, with clear ideas about “possibilities and limitations“.

‘’It is also necessary to take into account the notable gap between European culture, with its profound Christian roots, and Muslim thought’’, the Polish pope wrote two years before his death.

‘’Public authorities have the responsibility of controlling waves of migration with a view to the requirements of the common good’’, the much-respected Catholic leader wrote in Ecclesia in Europa. Read more at TGP.