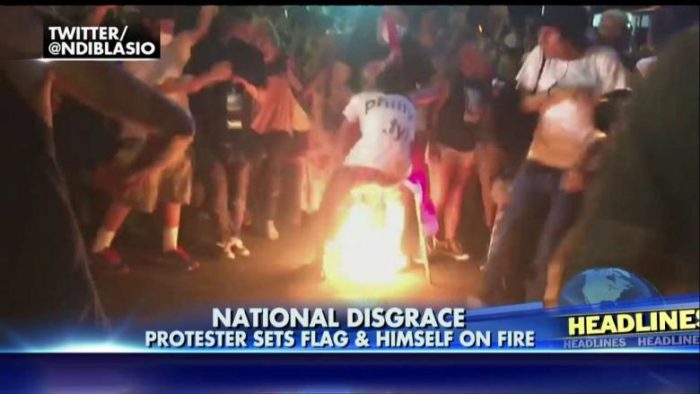 People are stepping up their stupid game. This protester got what he deserved for burning an American flag! The other protesters should have let him burn.

While President Obama, VP Joe Biden and other top Democrats were bashing Donald Trump and making the case for Hillary Clinton, the protests continued outside the DNC in Philadelphia last night.

A reporter, Natalie DiBlasio, captured the video above as one protester stomped on the burning flag and inadvertently set himself on fire.

Bystanders helped him quickly extinguish the flames as he dropped to the ground in a panic.

One protester yelled “burn that white capitalist s*** to the ground!” as Old Glory burned and people cheered.

Another flag-burning left some protesters disappointed because the flag seemed to be made out of a non-flammable material.

The flag burning outside #DemsInPhilly pic.twitter.com/UJLQ2tMYZ4

A Buzzfeed reporter at the scene said many protesters disagreed with the flag-burning and tried to to put a stop to it.

Heres Vermin Supreme. Crazy as it sounds, he's the one who deescalated the flag burning as it was getting more tense pic.twitter.com/ClW1cD9cWC

There were at least seven arrests made as some protesters attempted to storm the arena as President Obama began speaking.

One protester told USA Today that there was a specific group of protesters looking for confrontation and who were seemingly intent on getting arrested.

“There was a small group that went into this with the intention of getting arrested,” Trevor Minter said. “But now they’re lumped in with the rest of the peaceful protesters.”