It’s just that like the commercial… “I’m not a security guard, I’m a security monitor” the problem is they are paid to enforce the law. Why aren’t these people being hauled off in handcuffs? Should be easy enough to prosecute since it’s all on film.

What’s up next, tearing down George Washington monument because it promotes White Privilege or something? 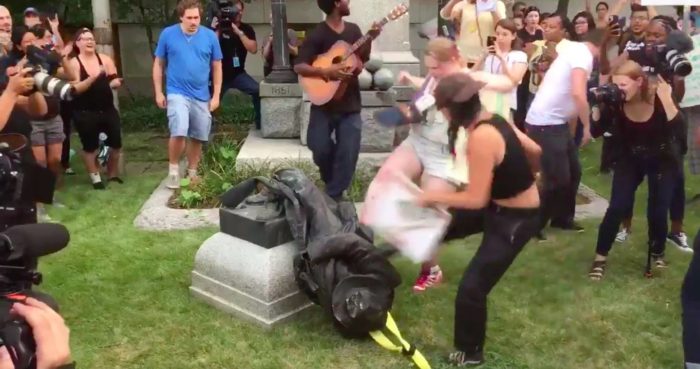 TGP: Protesters ripped down a monument of a Confederate soldier Monday evening. The monument has stood in Durham County, NC since 1924.

WNCN reports: A crowd of protesters gathered outside the old Durham County courthouse on Main Street Monday evening in opposition to a Confederate monument in front of the government building.

Around 7:10 p.m. a woman climbed the statue using a ladder and attached a rope around the statue.

Moments later, The crowd pulled on the rope and the statue fell.

In 1924, the Confederate statue was dedicated to Durham.

Engraved on the front of the monument is “The Confederate States of America.”

Above it, is a statue representing a soldier who fought in the civil war.

“It needs to be removed,” Loan Tran, an organizer, said earlier Monday. “These Confederate statues in Durham, in North Carolina, all across the country.”

There are similar monuments in several cities around North Carolina.

MORE: Protestors rip down statue of Confederate soldier. Monument has stood since in @DurhamCounty since 1924. @ABC11_WTVD pic.twitter.com/4MjFXsxS18

Protesters then went on to block off streets.