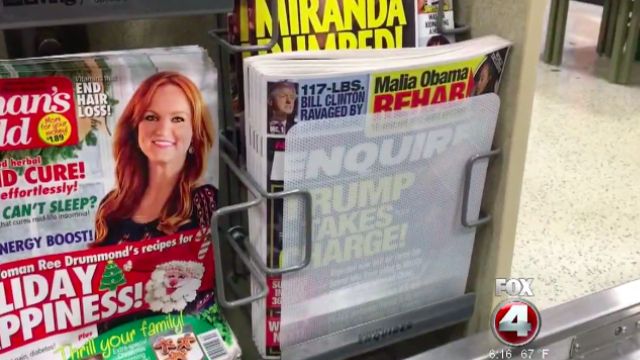 What is Publix trying to accomplish by covering magazines with Trump on the cover? He is going to be president, covering a magazine doesn’t change that.

A Publix shopper turned to Four in Your Corner after seeing magazines with President-elect Donald Trump’s picture being covered at the grocery store.

He was shopping at the Publix on Del Prado Boulevard and Kismet Parkway in Cape Coral. “I lift it up and there was a picture of Donald Trump, the President-elect. I was like ‘Wow, really? I mean, what’s next?’” Walter Indyk said.

The white screen covers are usually for magazines with inappropriate language or pictures.

“I was flabbergasted. I was amazed. I couldn’t believe it,” Indyk said. “I was like ‘This guy’s going to be the President. They have the nerve to cover his picture up at the check out aisle?’”

“I don’t understand what is trying to be protected here,” Rachael McDonnell of Cape Coral said. “Whether everybody likes it or not, Trump is the President-elect.”

Indyk called the Manager, who he said told him they got a lot of complaints about having the magazine there, and it was a corporate-wide decision.

Four in Your Corner reached out to Publix corporate office. A spokesperson said in a statement, in part:

“The National Enquirer receives the most customer complaints about front page content, so they were added to the list of magazines required to be covered, just last week.”

“Really? I don’t have any faith in that at all. I bet you once they have a National Enquirer that doesn’t have a picture of the future president on it, they’ll take those covers off,” Indyk said.