It’s just a matter of time before Mount Rushmore is defaced or blown up.

TBS: Mayor Catherine Pugh said she has no plans to remove the Francis Scott Key monument in Bolton Hill that was vandalized before dawn Wednesday and has directed art preservation experts to determine the cost of cleaning it.

Exactly 203 years after the Maryland attorney wrote the poem that would later become the national anthem, the city awoke to find the words “Racist Anthem” spray-painted on the Eutaw Place monument and red paint splashed on it. 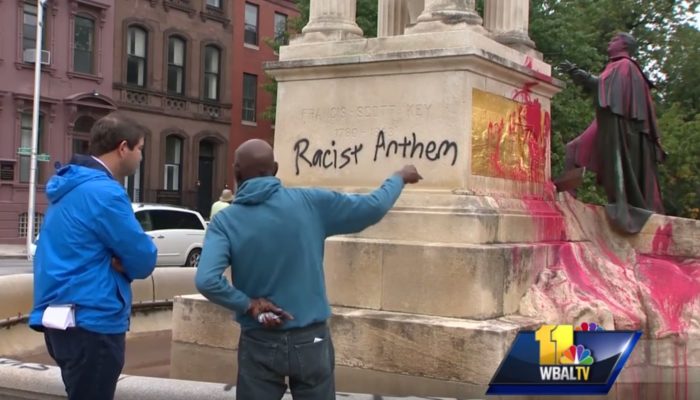 City officials said they know of no way to prevent future vandalism, short of catching the person or people responsible. Police don’t have any suspects or surveillance footage of the incident.

“Ultimately, it’s going to come down to them being caught and charged,” police spokesman T.J. Smith said.

Officers make periodic checks on city property during their patrols, but the department does not plan to place the Key monument under constant police protection, Smith said.

“We can’t ensure it’s not going to happen again,” Pugh spokesman Anthony McCarthy said. “We understand the freedom of expression, but there certainly has to be a more constructive and productive way to have a conversation about history.”

The city spent $125,000 to restore the Key monument in 1999, after the monument went neglected for years, with cracked concrete and a broken fountain, according to an article in The Baltimore Sun at the time.

A New York-based art conservator hauled away tons of trash and rubble; cleaned and applied a protective wax coating over the bronze figures and plaques; cleaned, repaired and removed stains from white marble; cleaned and repaired the granite wall surrounding the fountain at its base; and applied gold leaf to two plaques, The Sun reported.

The gold leaf will likely need to be removed and replaced, said Eric Holcomb, executive director of the city’s Commission for Historical and Architectural Preservation. The city will submit an insurance claim once the cost is determined, he said.

Holcomb said he understood the vandals’ intent, but he called the incident “disheartening.”

“It’s so counterproductive, what they’re doing,” he said. “History’s messy. It’s nuanced. It’s something to talk about, not something to erase.” More

100%FedUp: The mayor of Baltimore says she has no plans to remove the city’s monument to Francis Scott Key, after the words “racist anthem” were sprayed this week on a statue of him. Key wrote what would become the national anthem 205 years ago while he was held captive on a British ship during the Battle of Baltimore in the War of 1812.

The people claiming the anthem is racist need to pick up a history book: Some people think the anthem’s rarely sung third verse is racist because it refers to “hirelings” and “slaves”. This is in reference to mercenaries and soldiers enlaced to fight for the British.