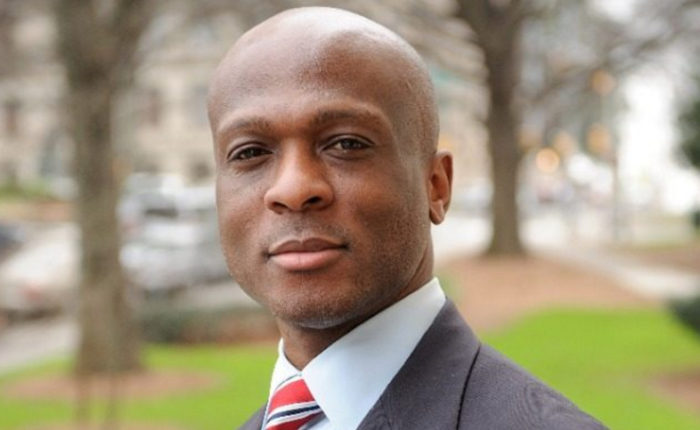 Oh the hypocrisy! I really hope that the DNC selects muslim Keith Ellison to be their new Chairman.

It’s not only that, the DNC claim to be champions of women’s rights yet Islam treats women as if they are property. A husband, father or a brother can legally kill his wife, daughter, or sister if she disrespects their “family.”

Islamic State killers toss a homosexual from a rooftop in the caliphate.

Vincent Tolliver, a former candidate for chairmanship of the Democrat Party, was expelled from the race after he cited Islam’s positions on gays.

Tolliver was expelled from the race by DNC Chair Donna Brazile after the truthful remarks.

A candidate expelled from the race for the chairmanship of the Democratic National Committee (DNC) for criticising Islam tells Breitbart News he intends to sue for a breach of his First Amendment rights.

Vincent Tolliver, who previously ran an unsuccessful campaign for Congress in Arkansas, was expelled from the campaign by interim DNC Chairwoman Donna Brazil, after telling The Hill he didn’t believe his rival Rep. Keith Ellison (D-Minn) should become chairman because of his Islamic faith, citing the religion’s positions on homosexuality.

“His being a Muslim is precisely why DNC voters should not vote for him. Muslims discriminate against gays. Islamic law is clear on the subject, and being gay is a direct violation of it. In some Muslim countries, being gay is a crime punishable by death,” Tolliver said.

“Clearly, Mr. Ellison is not the person to lead the DNC or any other organization committed to not discriminating based on gender identity or sexual orientation. I’m shocked [the Human Rights Campaign]has been silent on the issue. A vote for Representative Ellison by any member of the DNC would be divisive and unconscionable, not to mention counterproductive to the immediate and necessary steps of rebuilding the Democratic Party,” he continued. More