Nancy Pelosi and anyone else who is against building the wall should move their homes to where these gentlemen live and have a taste for themselves.

Pelosi sits in her ivory tower speaking to Americans in a condescending tone as if she knows what’s best for us “little people” using language so offensive that it causes anger and resentment every time she opens her big trap. Why is this demented tool still in Congress getting richer by the minute? Why is she an advocate for open borders? Who is paying her to support this disastrous, treasonous policy? 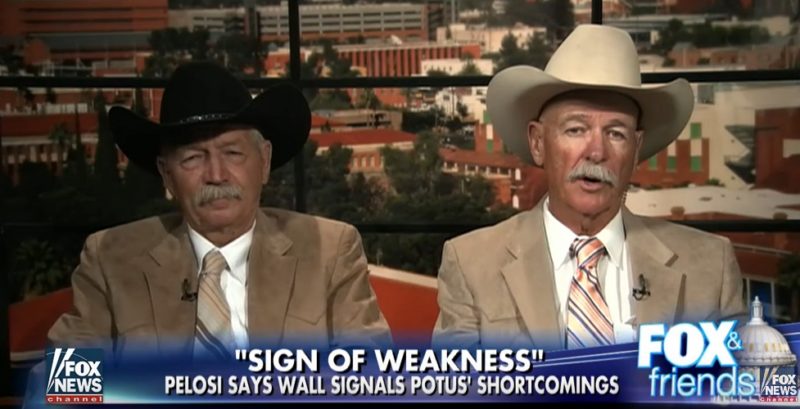 100percentfedUp: During an interview with Chuck Todd of Meet the Press, House Minority Leader Nancy Pelosi slammed President Trump and his dogged determination to get a border wall built. Leading up to a showdown in the House between Democrats and Republicans Nancy laid down the gauntlet and provided some much needed humor for anyone who was watching. In her usual dingbat style, Nacny ranted on about how Trump’s wall was “immoral and unwise”. She also claimed Trump was “weak” for wanting to build a wall.  So making the safety and security of our nation a priority is “immoral and unwise?”

Twisted reasoning is all that comes from Pelosi these days…especially when in 2006 most prominent Democrats voted to build a barrier at the border.

Fred Davis and John Ladd are two Arizona ranchers who were guests on Fox and Friends this morning. As ranchers who are living and making a living on our US-Mexico border, they had a very different story to tell viewers. While laughing at claims made by Democrat House minority leader Nancy Pelosi, Ladd and Davis talked about how ridiculous her claims were and what the benefits of a real wall on our borders would mean to the actual residents living in the nightmare of illegal immigration.

John Ladd was asked if he ever invited Pelosi to the border and he responded to Fox and Friends host Steve Doocy by saying, “Yes, but she never responded.”