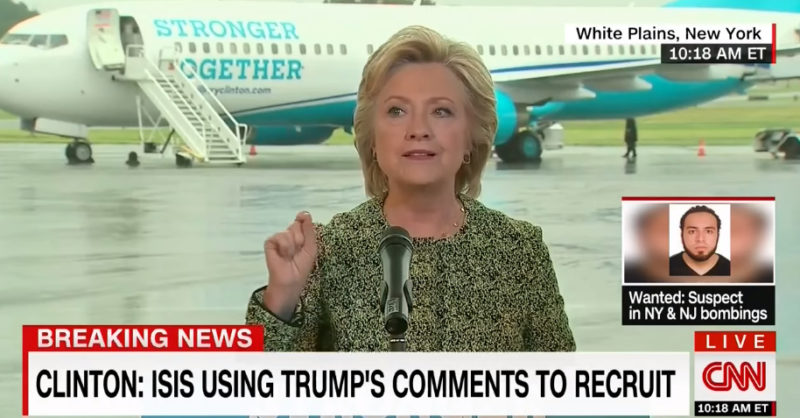 Reporter asks Clinton if she’s worried bombings are ISIS or Russia trying to influence the election. That question was NO doubt handed to that reporter by one of Clinton’s staff. It was just too stupid for any reasonable reporter to ask.

Bloomberg Politics reporter Jennifer Epstein asked Democratic presidential candidate Hillary Clinton during a press conference Monday whether she believed the previous weekend’s terrorist attacks in New York and Jersey were a plot– possibly carried out by the Russians— to get her Republican opponent Donald Trump more votes.

“Are you concerned that this weekend’s attacks or potential incidents in the coming weeks might be an attempt by ISIS or ISIS sympathizers, or really any other group, maybe the Russians, to influence the presidential race in some way and presumably try to drive votes to Donald Trump, who is, as you’ve said before, widely seen as perhaps being somebody who they would be more willing to– or see as an easier person to be against?” she asked. More