‘Last Time I Listened to Ariana Grande I almost Died Too’

I would think that his employer would take him to the woodshed, but it’s CBS so he is probably being groomed to be Stephen Colbert’s trusted sidekick.

Leavitt didn’t realize the magnitude of this tragedy? What is unclear about “multiple confirmed fatalities?” English children blown up by a terrorist is a big joke to this Leftist piece of crap. I am sick and tired of these Liberal non-apology apologies.

TGP: Two explosions went off tonight at Manchester Arena where popstar, Ariana Grande was performing killing over 20 people and injuring over 50.

While the majority of us are in shock and sending out prayers to the victims families, vile CBS reporter, David Leavitt is making jokes about it. 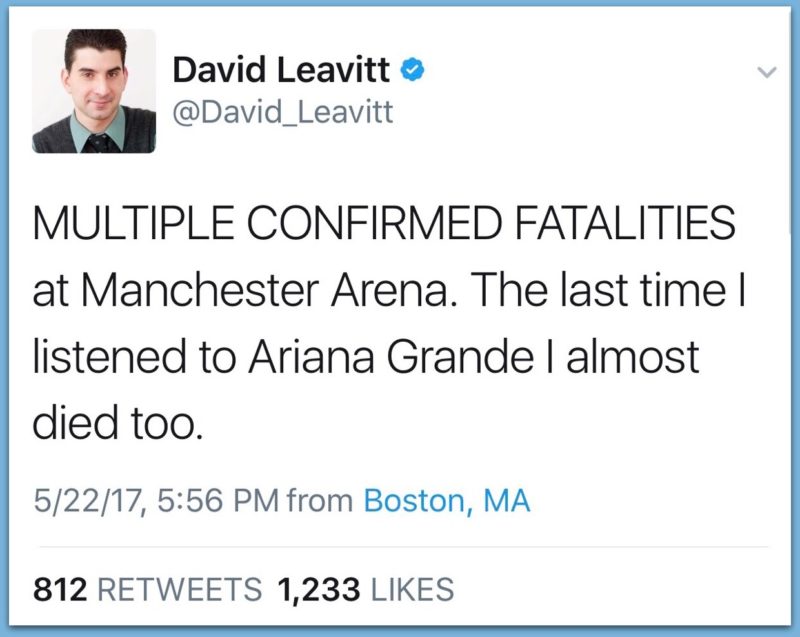 Leavitt also joked that he thought Ariana Grande was ‘something you order at Starbucks’. Innocent people were killed and injured at this concert including children and he thinks this is appropriate? This is liberalism, folks. Zero decency. Zero compassion.

Below is a photo of what this reporter is making fun of. There is nothing remotely funny about this. A terrorist attack that takes the lives of innocent people including women and children is absolutely devastating.

MULTIPLE CONFIRMED FATALITIES at Manchester Arena. The last time I listened to Ariana Grande I almost died too.

Honestly, for over a year I thought an Ariana Grande was something you ordered at Starbucks.

@DuncanSmithNBA @David_Leavitt This isn’t even funny

@MrAdamAp @David_Leavitt What an attention seeking asshole. Probably put his mention reply filter on and went about his asshole life.

@OpTicMiDNiTE @David_Leavitt Seriously makes me sick. I don’t say this often but I hope he gets fired.

@David_Leavitt Dude, no. Delete and sincerely apologise to save yourself a shred of grace and dignity. Don’t just carry on joking, you plum.

@Advil @David_Leavitt that’s truly unbelievable. and the fact that it had so many RTs & likes makes me wanna vomit.

@David_Leavitt Got to hope that this is going to lead to David getting a few less freelancing gigs.

@DomGarrett @David_Leavitt Wow. I don’t even know the words to describe this level of arrogance and stupidity.

After getting lambasted by angry people over his tweet, Leavitt issued a fake ‘apology’ and proceeded to lie. He claims he didn’t realize the magnitude of the tragedy, but in his original tweet with the ‘joke’ in it stated that there were multiple fatalities in capital letters. Clearly he knew this was a huge terrorist attack with many deaths.