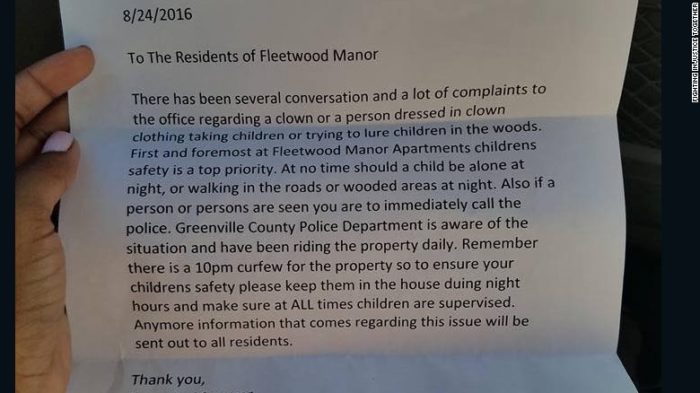 This is just crazy! Like a horror clown movie coming to life. I hope these parents are talking with their kids and keeping a close watch on them!

Police in South Carolina are investigating reports of a person in a clown suit trying to lure children into the woods at an apartment complex.

The warning to residents came last week at Greenville’s Fleetwood Manor Apartments, where the property manager distributed a letter.

The letter stated that there had been “a lot of complaints” about a person in “clown clothing” who was “taking children or trying to lure children into the woods.”

The letter stated that police were notified and were conducting daily patrols in the area.

It also reminded residents that their children should not be out alone at night and about the property’s 10pm curfew for children.

A mother who lives at the complex told FOX 8 that her son and many other children reported seeing the clown near a basketball court.

Read more on the story from FOX 8.