Trump Supporter Roseanne Brings The Hammer Down On Jimmy Kimmel

Roseanne Barr rips into Kimmel: “I’m still the same…you all moved. You all went so f**king far out you lost everybody. A lot of us, no matter who we voted for, we don’t want to see our president fail. Because we don’t want  Pence! Are you f**king kidding me? You want Pence? You want Pence for the freaking president? Well then, zip that f**king lip.”

Roseanne is still keeping it real!

100%FedUp: Roseanne Barr brought the hammer down on Jimmy Kimmel last night! She made an appearance on  “Jimmy Kimmel Live!” alongside her on-screen husband, John Goodman, to dish about the “Roseanne” revival. Barr’s character, Roseanne Conner, is a supporter of President Trump in the show’s reboot — much like Barr is in real life.

A plot line in the revival of the show is that the Conners voted for Trump. 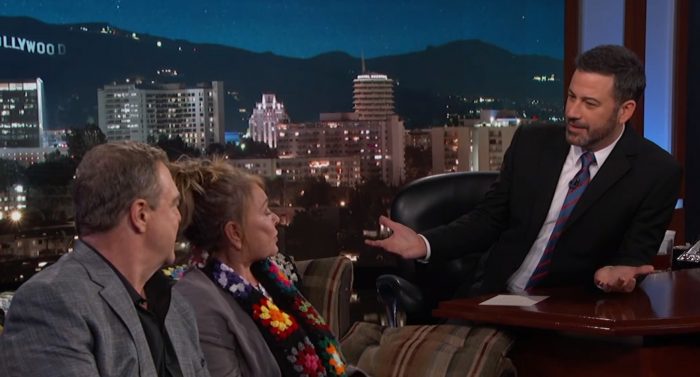 On Thursday, Jimmy Kimmel couldn’t wait to being up the topic of President Trump to Barr.  He questioned the 65-year-old about her own support for Trump but probably didn’t expect the answers he got:

Kimmel said, “I’m shocked because I know you were a very socially liberal person in general”.

Wow! Tell us what you really think!

@therealroseanne great segment on @jimmykimmel . It’s great to hear on TV what the rest of the country is thinking!

Roseanne confronts Jimmy Kimmel over Trump opposition: ‘You all went so f—ing far out, you lost everything’ https://t.co/eWq0Wl1DM9

Roseanne, you left a bad taste in my mouth after the National snthem, but you turned me around. Thank you for standing up to Jimmy Kimmel. Only you would have the balls to do it! MAGA!!!

@jimmykimmel Let me add clarity to what Roseanne said to you. If Hollywood shut down forever, life would go on. But, if real America, blue collar America, didn’t show up to work for one month, this country would cease to exhist. Try and drift back to earth. Save your career

Biden: I Will Provide A ‘Pathway to Citizenship for Over 11 Million Undocumented’ Immigrants
November 24th, 2020 Flag And Cross

Trump Supporter Roseanne Brings The Hammer Down On Jimmy Kimmel