There you go… Just another myth, another lie, another desperate attempt to divide and conquer. Whatever credibility she had just went down in flames.

One of Alabama Senate candidate Roy Moore’s accusers admitted that the yearbook she claims he signed was slightly doctored, during a Friday interview with ABC News.

Beverly Young Nelson, who accused Moore of groping her in the parking lot of a restaurant where she worked, appeared with famed liberal attorney Gloria Allred in the interview with “Good Morning America,” where she admitted to adding the date under Moore’s signature. Read more at CT. 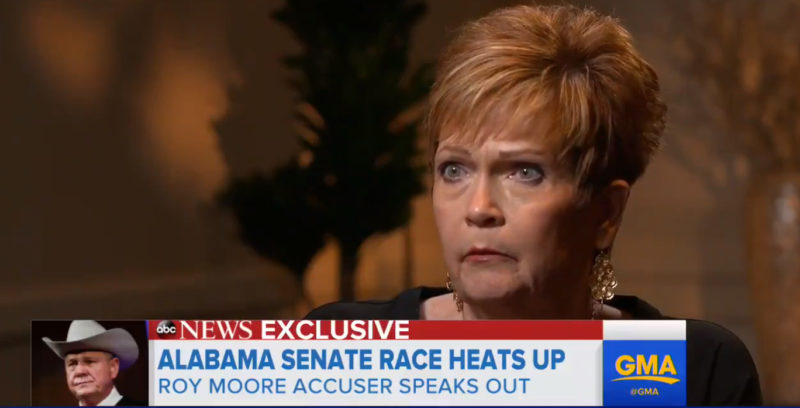 Beverly Young Nelson, one of the women accusing GOP Senate candidate Roy Moore of sexual misconduct, tells @GMA it “sickens” her to think what might happen if Moore is elected. https://t.co/wuEGWr0kng pic.twitter.com/lcp5OY4x3A

She now admits she added the location and date.

Here’s the CNN link where you can see the that the location and date added is in the same ink as the last name and D.A. So obviously she’s lying about that.

She added the last name and the D.A. as well, as the ink shows.

The reason Nelson added D.A., despite the fact that he wasn’t the D.A., was that he had handled her divorce and signed her order with ‘D.A.’ at end of his name. His assistant added ‘D.A.’ to denote that she was signing orders on his behalf. So she was consciously imitating his signature.

Who would allow a judge to handle her divorce if he’d tried to attack her?

And one more thing.

This also calls into question another accuser, Debbie Wesson, who said Moore dated her when she was 17 and he wrote her a note then. But the signature on her note appears identical to the one that appears to have been added by Nelson. So that raises a question about whether that’s real either.