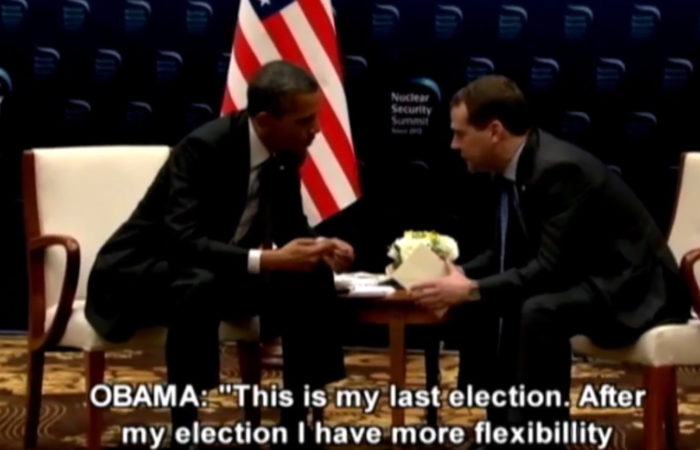 Are the Russians getting sick and tired of progressives talking smack about them?

The Western media missed an oh-so juicy nugget out Russia recently that should have set off alarm bells in Washington.

Asked about the current state of U.S.-Russia relations, Foreign Ministry Spokesperson Maria Zakharova gave a long winded answer that can be read below. In her answer, Zakharova suggested Russia may “publish leaks” about “secrets” the Obama administration asked the Russian government to keep private. The shocking statement can be found in the second to last paragraph of Zakharova’s answer highlighted in both bold and italic.

You could just imagine the headlines this would have made if this was about a Trump administration official.

But because it is about Barack Obama, arguably one of the worst presidents in US history, the liberal mainstream media ignores this completely.

Question: How do you see the future of Russian-US diplomatic relations in the context of the current atmosphere in Washington? Can you confirm that Secretary of State Rex Tillerson will come to Moscow in April?

Maria Zakharova: Apparently, many volumes have been written about the development of Russian-US relations. I announced the release of the Foreign Ministry’s yearend Diplomatic Bulletin and even showed it at the previous briefing. I believe that about 20 per cent of that bulletin was devoted to Russian-US relations, the way we see them, how we want them to develop, what we expect from Washington, what we are willing to do with the United States, the priority areas of cooperation, areas where our cooperation should be revived without delay and the areas where this can wait, at least for a limited time. This issue has been covered in interviews by Foreign Minister Sergey Lavrov, comments by Deputy Foreign Minister Sergey Ryabkov and in numerous statements made at all levels by representatives from various Russian agencies, political analysts and politicians, as well as officials from the legislative and executive authorities. We can talk about bilateral relations with a different degree of mastery, but we would like to start implementing our relationship at long last.

We provided our views on bilateral relations and the reasons for blocking them under President Obama. We said that we were willing to work with the new US administration, under President Trump. I don’t think we need to invent anything in this respect, because so much has been said before. Simply, we should start concrete practical work. We are ready for this.

You know that we always invite our American colleagues and diplomats to join bilateral or multilateral dialogues on issues in which the United States has traditionally played a big and active role, such as Syria, the consultations in Astana and many others. We expect Washington to formulate its foreign policy approaches in the form of a concept. We are ready for pragmatic and specific work on the principles that we have described many times.

As for the visit by US Secretary of State Rex Tillerson and the information about it, this is what I can say. It’s not a secret that preparations for any visit include the coordination of the time when it can be announced. Visits by foreign ministers are public events that are never kept secret. At least, I don’t know about any secret visits by foreign ministers in Russia or the United States. Preparations for such a visit also include the coordination of the format, agenda and the date it can be announced to the public. It is a matter of propriety and respect for each other’s interests. One side proposes a date, and the other side is expected to accept it. This date should be acceptable to both sides, because the foreign ministers have packed schedules. The issue also concerns the coordination of the agenda by experts. One side informs the other side of the issues it plans to discuss, and the other side needs to respond that the agenda is acceptable. In other words, the sides need to reach agreements on many issues, after which they can announce an upcoming visit. This is how we work with our colleagues.

To tell the truth, over the past few years we’ve seen many strange things happen in Washington in connection with preparations for visits or talks by our foreign ministers. The US Department of State has more than once asked us not to announce planned visits until the last minute. This is not our tradition. We have been operating openly for years, but we have respected the requests we have received from our colleagues in Washington in the past few years. But what happened after that? First, the US Department of State asked us to keep the planned visit quiet and not to announce it until the last possible minute, until we coordinated the date. We did as they asked. But a day or two later the information was leaked by the US State Department and sometimes by the US administration. Frankly, this put Russia and the media in a strange situation, because they didn’t know who to believe – the official agencies or the many leaks.

It is difficult to say if this diplomatic communication is a US tradition or the latest technique. But it definitely doesn’t correspond to our traditions. We believe that everything we coordinate should be made available to the media in accordance with diplomatic procedure. When we coordinate a visit and the date for announcing it, the information should be made public calmly and as agreed. This is what we do in relations with our colleagues from other countries.

As I said, such cases in our relations with the US Department of State have become a bad tradition over the past few years. So, I can say in response to your question that we will make the date and format of contacts between the Russian and US foreign ministers public after we coordinate them. We won’t keep them quiet. At this point, I don’t have any information I can share with you. I can say that this visit and such contacts are possible in principle, but it would be premature to talk about timeframes.

Also, I would like to say that if the practice of leaking information that concerns not just the United States but also Russia, which has become a tradition in Washington in the past few years, continues, there will come a day when the media will publish leaks about the things that Washington asked us to keep secret, for example, things that happened during President Obama’s terms in office. Believe me, this could be very interesting information.

Our American colleagues must decide if they respect the diplomatic procedure, if they keep their word on the arrangements made between us, primarily arrangements made at their own request, or we create a few very nice surprises for each other.

We can only assume that if Obama loyalists still hiding in the White House continue to leak intel, it’s inevitable that Russia will drop a bomb about Obama.