Isn’t it amazing just how easy it is to trigger these idiots? So-called climate change aka global warming has not killed anyone.

Al Gore has spent decades preaching about global warming and the weather is still changing.

So, wise up Tim Ryan you’re an overpaid democrat there is NOTHING you people can do to stop the weather. Got it? 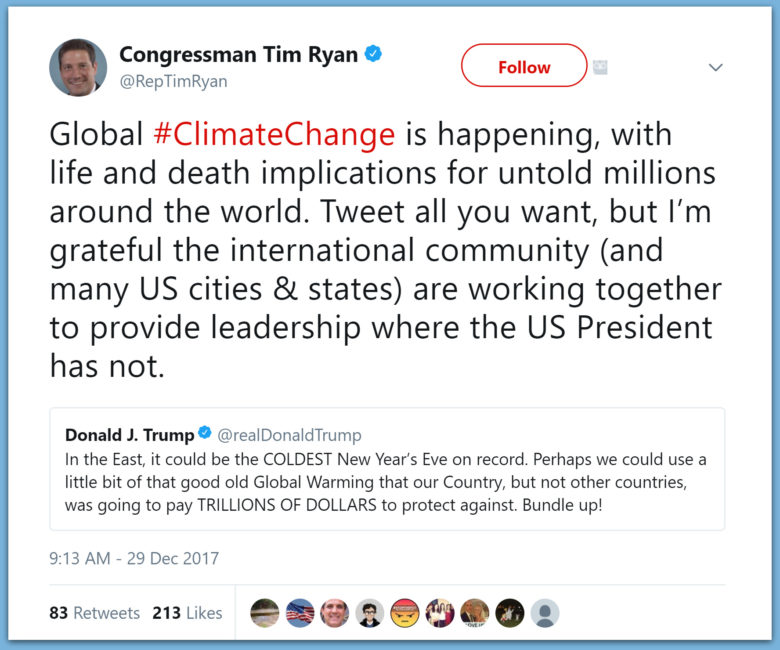 “Global climate change is happening, with life and death implications for untold millions around the world,” Ryan said, adding that he was grateful for the international community and U.S. cities and states that were providing leadership on the issue.

Tim Ryan was responding to Trump’s Thursday evening tweet saying the U.S. “could use” some global warming as record-breaking cold weather blankets much of the country.

Nine years ago propagandist Al Gore predicted the North Pole would be completely ice-free by today, but not only is he never held to account, his junk science is being force fed to kids in public schools.

Gore made the prediction to a German audience in 2008. He told them that “the entire North ‘polarized’ cap will disappear in 5 years.” https://t.co/PCACncHggF pic.twitter.com/SXkuFTqWkd

Remember this every time the celebrities and the elite try to sell you this garbage. If global warming was truly the threat they believed it is, then they would give up their private planes, yachts, and multiple mansions years ago.

Brave Female Journalist Questions Afghan MP About What He Considers Rape, Then He Threatens To DoThis...