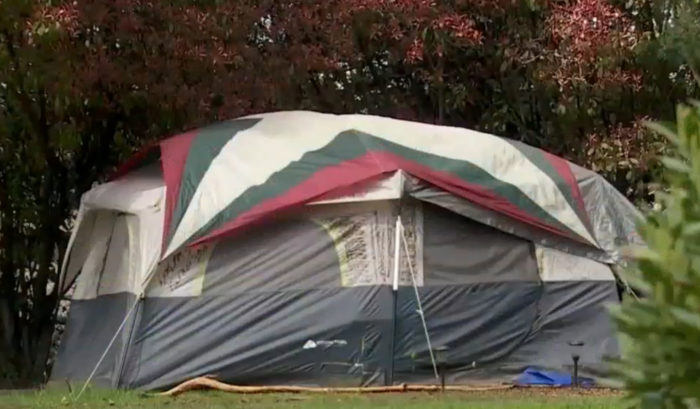 Didn’t the wise leaders of Portland direct residents to let the homeless live on the lawns? How’s that working out? I swear the stupidity of these politicians is laughable.

The citizens of Portland are getting fed up with being second class citizens after the bums, drunks, and druggies.

Camouflaged by green and black tarps, it’s easy to miss this homeless camp south of Interstate 84 and north of Northeast 34th and Halsey. Look closely, though, and you’ll find tents dotting the embankment.

Neighbors say it’s the source of an increase in crime in the area. Rampant drug use, prostitution, thievery — neighbors say it attracts more than the homeless.

In the last year Ray Gordon says he and his neighbors have spent hours on the phone reporting this camp to city, county and state agencies.

“You know, it’s funny, because I think it’s a big shuffling act,” Gordon said. “They get moved, and I’ve seen a guy pushing a cart, and then a week later they come right back.”

The majority of the land is owned and operated by the Oregon Department of Transportation. A nearby auto shop owns a vacant lot used to park cars nearby.

ODOT spokesperson Don Hamilton says the state agency frequently enforces illegal camping at this location. Currently, the camp is not “posted,” meaning a sweep is not planned. However, Hamilton says crews have been there “a number of times” before.

Gordon says during January’s snow and ice storm, the camp swelled to approximately 100 people. He says transients also use his block as a freeway to come and go from the camp.

I’ve had a man sleeping on my front yard, and I’ve called the city, and the police showed up and they said there was nothing they could do,” he said. “I make sure I have a point to let them know that I am not happy that this is happening.” Keep reading at Fox57.