Go, Sarah Sanders! You do so well with these knucklehead MSM reporters.

What can Trump do to stop school shootings? Nothing. They have become normal as the years have gone by. All he can do is offer his condolences, prayers and wait for the next one just like the rest of us.

The disgusting, over-the-top daily attacks on our President by the media has reached a fever-pitch. Every day, our so-called “media” reaches a new low. 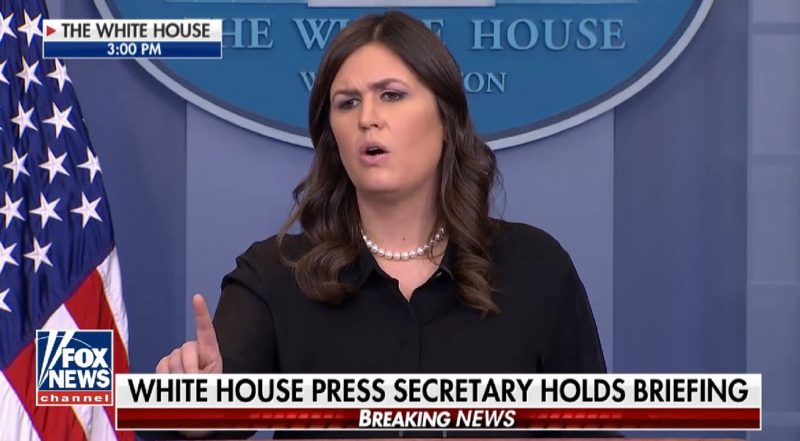 Today, when the media attempted to shame President Trump for a horrific high school shooting in Kentucky yesterday, was no exception. Thank goodness President Trump has one of the toughest women in America standing at the podium to lob the grenades they pitch at her with regularity right back into the press pool.

Alexander argued that since the Las Vegas massacre in October, there have been several school shootings, including one in Benton, Ky, Tuesday.

Sanders said that any loss of life, especially at a school, is “incredibly sad,” and that “all Americans deserve to be safe… in their communities.”

“That’s not in dispute,” Alexander countered, pressing her on what Trump is specifically doing.

“What is the policy the president is willing to pursue to help make sure these students are safe?” he asked, telling Sanders that Trump should address the nation and use the “bully pulpit.”

Sanders then fired back that Alexander’s line of questioning was “outrageous.”

“Let me be very clear on this: the fact that you are basically accusing the president of being complicit in a school shooting is outrageous,” said Sanders, emphasizing he directed the ATF to review “firearm provisions” and tasked the Department of Justice with cracking down on “violent crime” overall.

Alexander denied he was accusing the president of anything. Read more at 100%FedUp.