Like Scott Baio said to Rush.”Even if Trump did absolutely nothing for 8 years, he is still far better than Hillary.”

Never forget President Trump is up against dishonest, liars, crooks, cheats, and traitors. He needs our support, we the people, the working men and women who have been inspired by Trump must remain steadfast. 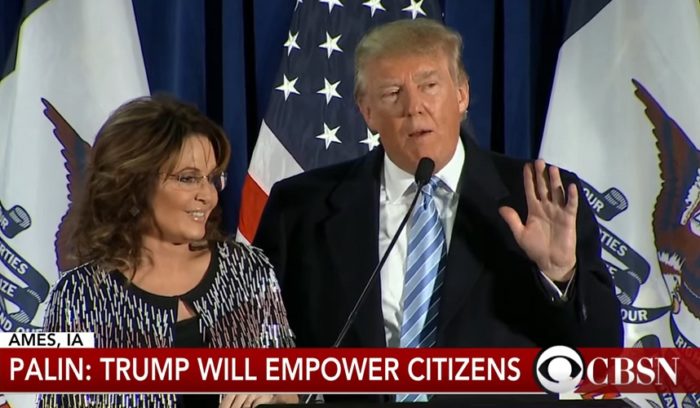 “I’m extremely pleased, of course, that our new president is in there building the team that he believes he needs in order to fulfill promises to the American electorate, to make America great again, and I’m very, very happy that he’s there,” said Palin.

She said she found the idea of giving a simplistic letter grade to the Trump administration annoying, preferring to say President Trump is doing “very well.”

“Remember, those of you who maybe still aren’t aboard the Trump Train but know that the Trump movement had to be ushered in, in order to get rid of the status quo that was harming America, keep doing your ABCs and remember what that was: it was Anybody but Clinton,” she said. “So stick with your little alphabet analogy there. Those who are asking for a grade of this administration, just keep remembering it could have been Clinton.”

Palin applauded Marlow’s point that arguing over the fine points of Trump’s policy, and even dealing with some disappointments, should be vastly preferable for conservatives over fighting for their political lives – and even basic constitutional freedoms, like free speech – under a Clinton presidency. She suggested imagining what sort of Supreme Court justice would currently be taking the late Antonin Scalia’s place under President Hillary Clinton.

Marlow noted that Palin has been “quite critical in recent days” of President Trump’s pick for Secretary of Education Betsy DeVos.

“She said, ‘Common Core now doesn’t exist’ or something, and you went buck wild on her,” Marlow recalled.

“I sure did!” Palin cheerfully agreed. “She said that, in fact, Common Core hasn’t really existed for the past couple of years. I would ask, do these politicians, do these elitist bureaucrats, do they even send their children or grandchildren, are they in public schools? When our kids and our grandkids come home and we sit down with them each night, still to this day, and we work with them on their homework, the Common Core curriculum is alive and not well in the classroom.”

“If the leader now of the education sector of our country would deny that Common Core is in existence, she needs to try to tell that to our really, really great public school teachers, who still have to explain and kind of apologize to the public school parents – I’m one of them – as to why the curriculum is as confusing and burdensome and less freeing for our teachers, who know what our students need best, as do the parents. Good schoolteachers still have to explain to us that under Common Core, these requirements are quite burdensome and nonsensical,” she said. More