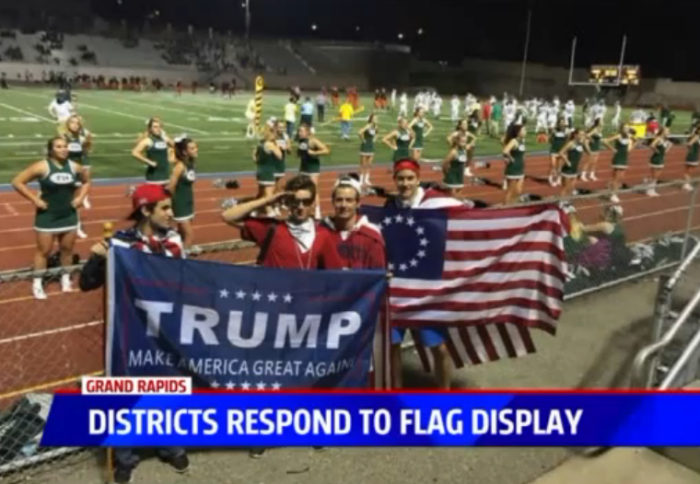 At what point will all the rational people stop bowing down to insane racist demands? They profess to be passionate enemies of racism; but in fact perpetuate racism by injecting it everywhere it does not otherwise exist.

Will the school make an exception for a BLM flag, “rainbow” flag , the mexican flag or any of another bunch of flags that they think are symbols of tolerance/diversity?

Patriotism is under fire in Western Michigan.

The OK Conference, representing 50 schools, has announced a crackdown on fans chanting, “USA” at football games. They are also implementing strict rules on flags and political banners.

“Coaches and fans are irate,” said Bill Simonson, the host of a statewide sports radio show. “People are tired of being told what flag to fly or what political side to lean towards.”

Mr. Simonson, who hosts “The Huge Show”, was the first to break this insane story.

Critics called the flag racist and a local superintendent said it symbolized hate.

“To wave a historical version of our flag, that to some symbolizes exclusion and hate, injects hostility and confusion to an event where no one intended to do so,” wrote Forest Hills Public Schools Superintendent Daniel Behm in a letter to parents.

Simonson, host of The Huge Show, told me local residents are furious. More