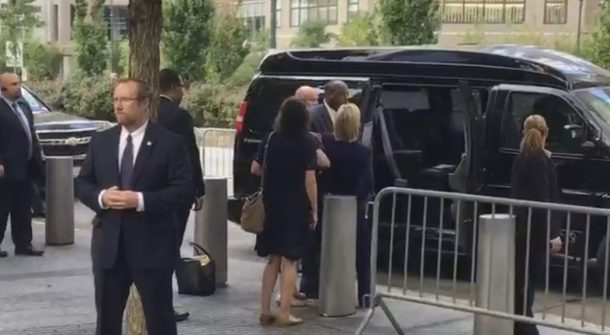 The Secret Service seemed to be trying to rush her out before anyone noticed something was wrong. And then when people noticed they tried to block everyone from seeing her.

The U.S. Secret Service followed atypical protocol with Hillary Clinton’s early departure from Sunday’s commemoration of the 15th anniversary of the 9/11 terrorist attacks at Ground Zero.

In a widely circulated video of the Democratic presidential nominee’s departure from the ceremony, Clinton can be seen leaning against a security bollard and then buckling and stumbling as her security detail helps her into a black van. Clinton’s campaign said she had suffered from overheating.

According to two former Secret Service agents who reviewed the video, the detail clearly had to rush and did not expect Clinton to leave at that time. They said the Service generally prefers for the protected individual not to wait for a car to arrive, although that has happened before. In the video, Clinton is leaning against the bollard as a black van pulls up.

One former agent said the risk of waiting was diminished considerably on Sunday by the thick bubble of security surrounding the commemoration. Protective details for Homeland Security Secretary Jeh Johnson, Republican presidential nominee Donald Trump and other city officials were also on hand.

It is also unusual for a detail leader to leave the protected individual’s side, as a Secret Service agent, Todd Madison, is seen doing in the video, to open the van’s doors. Opening the van is typically left to another agent. But because of the rushed nature of the departure, one of the former agents said, another rule of Secret Service protection appears to have carried the day: Whoever is closest to the door must open it.

“Every once in a while, you have to call an audible,” one of the former agents said. “We follow a methodology, not a script.”

The video also shows a dense thicket of agents closing around behind Clinton, giving her 360 degree coverage – another mainstay of Service protection.

Secret Service spokeswoman Cathy Milhoan issued the following statement later Sunday: “During the early departure today of one of our protectees, at no time did any Secret Service personnel violate security protocols.”

Milhoan later added: “The Secret Service is confident in the actions taken by its Protective Detail earlier today.”

The incident also raised questions about Clinton’s traveling group of reporters, which she left behind at Ground Zero when she departed unexpectedly, leaving the press with no knowledge of her whereabouts or condition for about 90 minutes. More