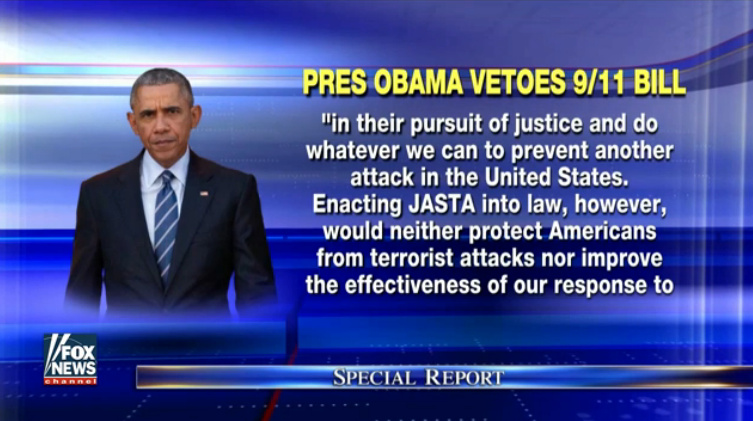 Sorry Obama, but placing foreign governments that sponsor terrorism above your own citizens is never going to fly. Even your own party saw the damage opposing this bill would have come election day. America first, now and forever!

The Senate on Wednesday voted to override President Obama’s veto of a bill that would allow the families of 9/11 victims sue Saudi Arabia, striking a blow to the president on foreign policy months before he leaves office.

Senate Minority Leader Harry Reid (D-Nev.) was the sole vote to sustain Obama’s veto. Not a single Democrat came to the Senate floor before the vote to argue in favor of Obama’s position.

Lawmakers don’t want to be seen as soft on punishing terrorist sponsors a few weeks before the election, at a time when voters are increasingly worried about radical Islamic terrorism in the wake of recent attacks in Manhattan, Minnesota and Orlando, Fla.

The House will take up the matter next, and Speaker Paul Ryan (R-Wis.) told reporters last week that he expects there be to enough votes for an override.

The legislation, sponsored by Senate Republican Whip John Cornyn (Texas) and Sen. Chuck Schumer (D-N.Y.), the third-ranking member of the Democratic leadership, would create an exception in the Foreign Sovereign Immunities Act to allow the victims of terrorism to sue foreign sponsors of attacks on U.S. soil.  More

College Admissions Leader Forced To Apologize For Saying This

Oops: Jihadi Work Accident... ISIS Kills 10 Of Its Own Fighters