This is one more reason why Democrats are so hurt after Clinton’s humiliating loss to President Trump. They can’t act as their own judge and jury anymore.

Basically, she took it upon herself to decide it was unconstitutional, therefore circumventing the entire judicial system that has been put in place so that people can’t just make up their own interpretation of our laws. As a direct result, she was fired for it. 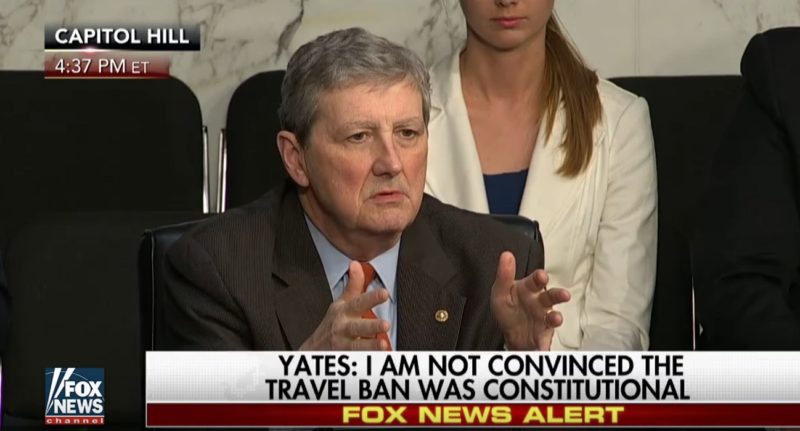 100%FedUp: Former acting Attorney General Sally Yates was grilled about her refusal to defend the president’s travel executive order…She made a huge mistake by assuming what Trump said during the campaign could be admissible in court…IT CAN’T!

FN: In a hearing centered on Russian interference in the election, one senator took the opportunity to question the former attorney general who was fired for refusing to defend President Trump’s travel ban.

“I believed any argument [the Justice Department]would have to make in its defense would not be grounded in the truth,” Yates said.

“We would have to argue that it had nothing to do with religion,” she said.

Kennedy asked whether there was no reasonable argument that could be made to defend the order any other way.

Yates said she believed the intent of the order was to discriminate against Muslims trying to come to the United States.

Here’s what former US Attorney Joe DiGenova said about Sally Yates: “This is a person of the extreme Left who should not have been anywhere near the decision-making process for this president.”

Yates was fired…and should have been!

New Yorker Magazine Argues America Should Not Have Had A Revolution