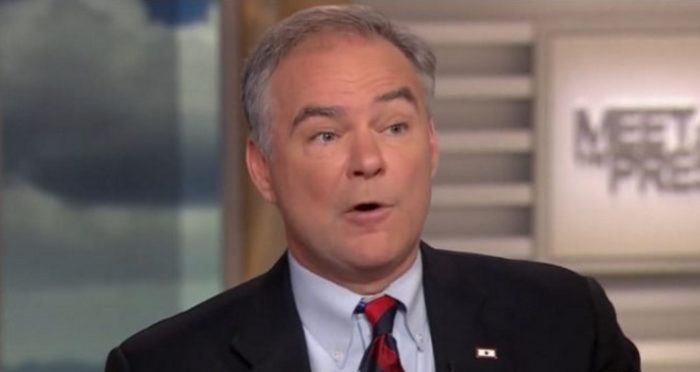 They just keep trying… Senator Tim Kaine should know better than this crap. I can change the magazine in my pistol in less than three seconds, & carry many loaded magazines. So what if each only holds 10? This terrorist had three hours to kill those totally innocent people. So you tell me how limiting the capacity of a rifle’s or pistol’s magazine is going to save lives? Just plain old stupidity at its finest.

Democratic Sen. Tim Kaine, who is on the shortlist to be Hillary Clinton’s vice president, called for limiting the size of magazines on semi-automatic rifles.

In an interview airing Sunday on NBC’s “Meet the Press,” moderator Chuck Todd asked, “Are you in favor of an assault-weapons ban?”

“I have voted for it,” Kaine said. “But I think there’s a better way to go at the problem and that is limitations on the size of magazines and ammunition clips.”

“So you think an AR-15 should be sold,” Todd asked.”You don’t think there should be any limitations?”

“I have voted for it and I would likely vote for it again,” Kaine replied, “But here’s a practical problem that I think you’re aware of. As soon as you define what an assault weapon is, you can’t sell a weapon and here’s how we describe it, gun manufacturers just make one adjustment or two and say see, this isn’t subject to the limitation. Whereas if you say you can’t sell an ammunition clip or a magazine with more than 10 or 12 rounds–”

“So you believe ammunition is the way to go,” Todd asked.

CIA Arms Shipment For Syrian Rebels Stolen By Jordanian Government... Then It Gets Much Worse