Josh Campbell is a former supervisory special agent with the F.B.I. who served as a counterterrorism investigator and special assistant to the bureau’s director.

Josh Campbell quit the FBI this week. Then he wrote an op-ed for The New York Times where he complained about people exposing the corruption and criminal acts by agency leaders.

Maybe the FBI wasn’t a good fit for Josh? 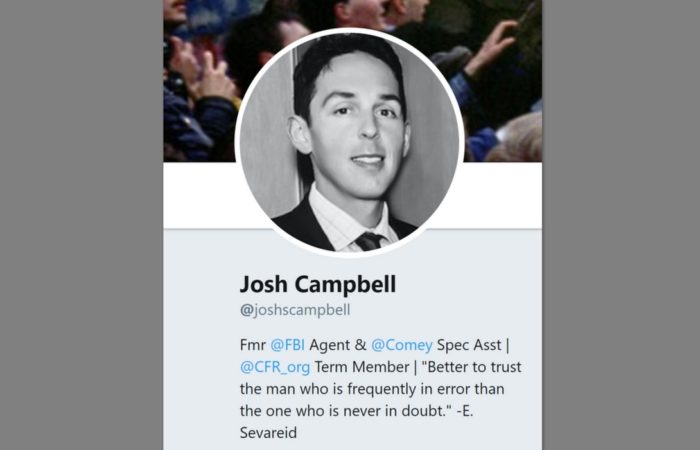 The New York Times thinks we should all stop picking on the FBI and let them continue their coup.

The liberal media is especially upset with President Trump for questioning the agency and the DOJ over their special counsel witch hunt.

Try to read this and not laugh out loud. Read more at TGP.

Axios reported: Josh Campbell, a special agent at the FBI, resigned on Friday and wrote an op-ed in the New York Times, citing dwindling public support and partisan attacks. “To be effective, the F.B.I. must be believed and must maintain the support of the public it serves. … These political attacks on the bureau must stop,” he wrote. “If those critics of the agency persuade the public that the F.B.I. cannot be trusted, they will also have succeeded in making our nation less safe.”

Now that the Memo is released and the “Russian Conspiracy” is proven false its time………#unleashhell#solmemes
Special shout out to @ThePeoplesCube for an idea…. pic.twitter.com/tLISziotWC

FBI agent calls it a career after #FISAMemoRelease …

Because ppl no longer believe what the FBI tells them… (Gee, I wonder why 🤔)

Hint: if you’re a snowflake plotting a coup, it’s not gonna work & expect humiliation when it crashes

#FBI FBI agent Josh Campbell resigned from the FBI because people are exposing the corruption and criminal acts by agency leaders. Now that’s a new one — evidently old Josh thought the FBI was there only there to commit crimes and oversee corruption! https://t.co/P4MSjLrSgm

wow good point…has anyone noticed this about the upper echelons of our IC ? They don’t seem like the strongest or smartest of men? pic.twitter.com/iVb0kAwRJn

MSNBC Commentator Unhinged: “We Need A Revolution” Against Trump... Twitter Hits Back!