As far as we’re concerned it’s too late for Sessions to redeem himself. He lost all respect when he recused himself from the Russian witch hunt.

Should we have hope that Sessions is doing something under the radar? He can either investigate the Clinton and Obama crimes, resign or go down as the biggest traitor in American history! 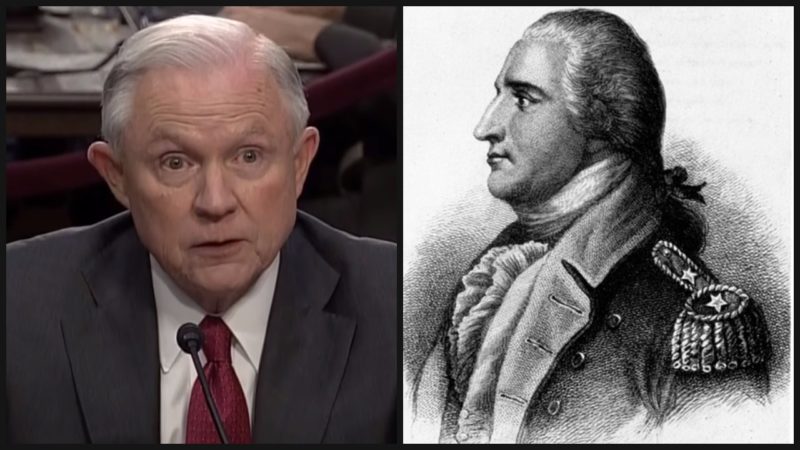 TGP by Joe Hoft: Benedict Arnold is the name that goes down in US history as the greatest traitor to the nation.  According to biography.com –

Benedict Arnold was born in Norwich, Connecticut, on January 14, 1741. A member of the Sons of Liberty, Arnold rose to the rank of general in the Continental Army during the Revolutionary War. Frustrated by the lack of recognition, he subsequently switched sides to the British and plotted the surrender of West Point. When his traitorous plans came to light, Arnold escaped capture and eventually made his way to England. He died in London on June 14, 1801.

The US today faces a time as important as the American Revolution.  President Trump was voted into office by the American people last year at this time.  He won in an electoral landslide.  Before the election he was attacked, but since the election the prior Obama Administration, the Clintons, the Democratic Party, the mainstream media, Hollywood, some elitist Republicans and the ‘deep state’ have tried to steal his win.  This concerted attack in large part may be because liberals in the US don’t want President Trump to uncover their illegal and traitorous actions when Obama was President.

The only thing stopping President Trump now is his own Attorney General Jeff Sessions.  Sessions recused himself from any investigations into Russia allowing a corrupt investigation into the President’s actions with Russia and/or any other dirt the investigators can come up with.  The investigation is not founded in US law, it’s a farce.  The investigators are biased, former Hillary and Obama team members and supporters and many, if not all, are involved with the Uranium One scandal.

Uranium One refers to the sale of 20% of US uranium to the Russians by the Obama Administration and his Secretary of State Hillary Clinton.  The Clintons made $146 million on the deal and no doubt Obama did too.  Sessions’ Assistant Attorney General, Rosenstein approved the Uranium One deal and then he hired Mueller to clean it up.  At the time the deal was approved there was a special FBI investigation ongoing into the deal and it was covered up until only a few weeks ago.  The Clintons know Uranium One was a big deal as reported in a leaked email from the Clinton campaign.

Many experts in the case believe that the Uranium One deal is the biggest scandal in American history.  If Jeff Sessions doesn’t soon order an investigation into the scandal he will go down as the greatest traitor in US history – even worse than Benedict Arnold himself.