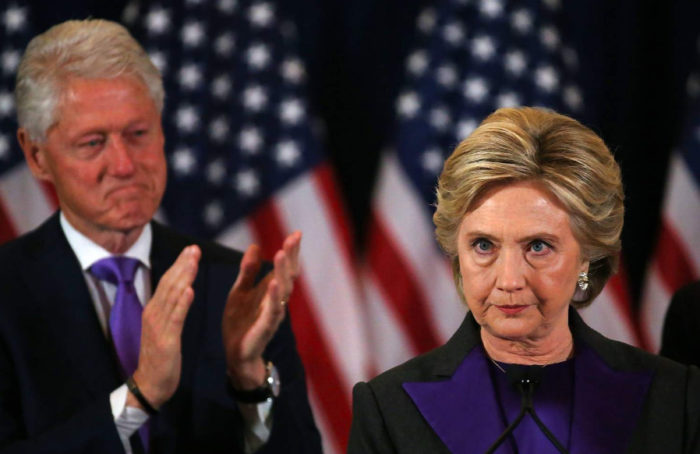 I personally won’t be happy, until they’ve lost every crooked dime and are behind bars too!

Almost 40 years after Bill and Hillary Clinton first entered American public life, they are to leave it beset by crushing humiliation.

Why did they think they deserved otherwise?

A zombie marriage killed long ago by Bill’s philandering was cynically reactivated to boost her White House ambitions.

Trump called her ‘crooked Hillary’. She certainly warranted the adjective ‘toxic’. She was chilly and aloof; the technocrat personification of America’s East Coast liberal elite that Rust Belt America and beyond had grown to despise.

In the end, too many people had simply grown tired of the Clintons emerging from scandal after scandal with their ambitions intact. But then, the Clintons always came with an awful lot of baggage, as this list of controversies proves . . .

The first whiff of scandal to surround the Clintons began with the 1993 sacking of the seven employees in the White House Travel Office, soon after Bill had become President.

These staffers were replaced by a commercial travel firm from Little Rock, Arkansas.

Critics claimed the changes were ordered by the Clintons so that their cronies — in one case a cousin — could take over the multi-million dollar business of White House travel arrangements.

A claim that Hillary had been instrumental in securing the firings — something she had denied — seemed to be confirmed by an internal White House memo unearthed in 1996.[…]

Mired in legal fees from their run-ins with prosecutors, the Clintons set about making money from their White House years. And how they have succeeded. Private speeches for banks and other corporations at $250,000 a time have earned them a fortune, put at $150 million. More