Islamic Prayer opens the State Legislative session in Delaware. Blatant Civilization Jihad cues being put forth in both the spoken and unspoken language, and no one noticed or cared.

This madness has to stop, when will the American public wake up? When it’s too late? I don’t live anywhere near these places but those of you who do had better do something NOW. It’s only going to get much, much worse.

TGP: The State Senate in Delaware opened with an Islamic prayer recently and instead of the Imam participating in the Pledge of Allegiance with his hand over his heart, he decided it was a good time to pick his nose. 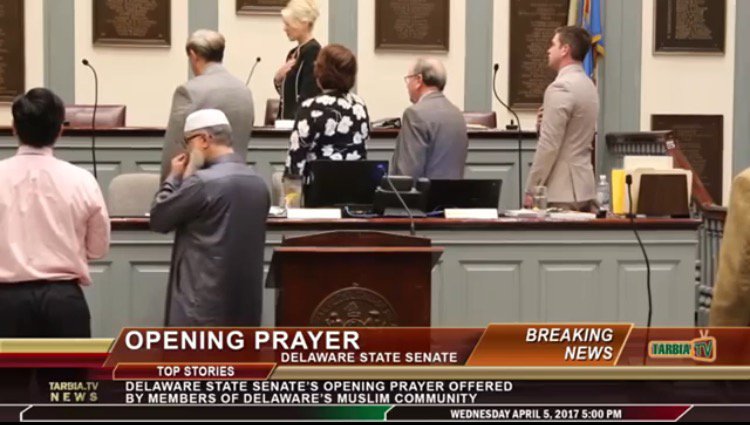 This Imam is giving a prayer in Arabic which nobody in the room understands (save for Muslims) and that is the point. He is pushing for Islamic supremacy. He is praying for ‘Allah’ to bring Sharia law to the U.S. while the idiot liberals in the room bow their heads in prayer.

This isn’t the first time we have documented this type of civilization jihad here at TGP. The Imam who prayed at the Washington National Cathedral in D.C. while President Trump sat in attendance after his inauguration cursed Christians and Jews in Arabic with the opening prayer. This is standard operating procedure.

Watch the video provided by patriots at Understanding the Threat:

Imam picks his nose during pledge after opening prayer for State Senate in Delaware. https://t.co/EyMOaeTUKE